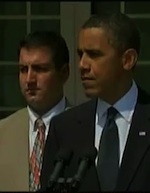 There is some good news  in this month’s report, but only if your first and last name is Pollyanna. Heh.

The Labor Department reports that the private sector added 67,000 jobs in July which according to reports is better than … expected? Or better than nothing. You choose.

Private payrolls that exclude government agencies climbed 67,000, after a revised 107,000 increase in July that was more than initially estimated, Labor Department figures in Washington showed today. The median estimate of economists surveyed by Bloomberg News called for a gain of 40,000. Overall employment fell 54,000 for a second month and the unemployment rate rose to 9.6 percent as more people entered the labor force.

Ed Morrissey does a good job of going through the numbers, but he picks up on what I found to be a little incredulous … that this report is good news.

So we created 40,000 fewer private sector jobs and the unemployment rate went up, and that’s a surprise on the upside? That’s mighty fine spin by Reuters … and completely expected.

If it’s such good news then why the increase? Because the BOLS reports that more people have begun looking for work … which, if there are not more jobs for them … leads to a higher unemployment rate.

The numbers are not good, and this is not what I call getting better either. More people are taking part time jobs just to stay afloat, and an economy like ours needs to create more than 60,000 jobs net.

What the financial press is saying about the “growing” economy

Balancing The Recession On The Backs Of … Men?

Unemployment rate drops as unemployed just plain give up
7 replies