From the released report, with a hat tip to Ed Morrissey at Hot Air. Update below: Underemployment measured at 20 percent-plus by Gallup.

Nonfarm payroll employment increased by 162,000 in March, and the unemployment rate held at 9.7 percent, the U.S. Bureau of Labor Statistics reported today. Temporary help services and health care continued to add jobs over the month. Employment in federal government also rose, reflecting the hiring of temporary workers for Census 2010. Employment continued to decline in financial activities and in information.

I really do not have time for comment this morning, but Limbaugh has frequently mentioned Obama administration rhetoric is setting the stage to redefine current unemployment rates as “normal” which bugs me.  Soon, they will be defining lower health care quality and services, an open border, higher taxes and federal control of our diet as normal too.

I’m assuming readers are familiar with the acronym SNAFU?

Gallup Daily tracking finds that 20.3% of the U.S. workforce was underemployed in March — a slight uptick from the relatively flat January and February numbers. 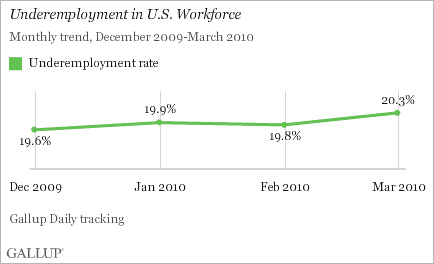 Take A Pay Cut … Save A Job

Unemployment estimates – with and without recovery plan Update: Video

Obama on jobs – ‘saved or created’ the new double-speak