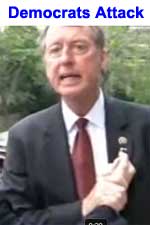 This is totally rich. The Democrats are saying this is all a nefarious Republican plot to sting Rep. Bob Etheridge (D-N.C.). It’s not legitimate … gotcha politics … inciting a reaction … partisan hit-job … attack anything Breitbart does.

This is crazy! (Check out how Etheridge believes young adults should get more involved with politics – via Hot Air.)

Here are the DNC talking points clearly questioning the motives of the student who dared to ask one simple question of the congress-critter. The hat tip goes to Ben Smith at Politico.

A national Democratic Party official e-mailed around a set of talking points about an hour ago, under the subject heading, “Etheridge Gotcha Video Background.

This story will not go away, and the DNC – if the talking points released are real – just made another political blunder. As a reminder, Etheridge already has apologized – sort of.

So which is it? A nefarious plot by the GOP to use young college Republicans who were may have been paid cash by Andrew Breitbart to sting Etheridge, or is Etheridge just another Democrat who was having a bad day and totally lost control?

Exit Question: If this was a female student and Etheridge grabbed the teen or 20-something girl like this, what would the reaction be?

Update: Oh my. David Weigel at The Washington Posts suggests it was a hug. Is he kidding? It looked like Etheridge was about to headbutt him when he grabbed the back of the kids neck!