No real time to write about Russia’s encroachment (invasion) into the Ukrainian state of Crimea, but I figured I’d post these video clips for review since I find them somewhat interesting. Let’s look back to yesterday’s Krauthammer comments and the 2012 election.

Sarah Palin was mocked by Foreign Policy magazine for suggesting Putin would be interested in invading Georgia or the Ukraine. Just yesterday, FP mag addressed their own comments and couldn’t bring themselves to admit Palin’s scenario did come around without mentioning the “I can see Russia from my house” lie and pointing out that she really didn’t know much about foreign policy.

Event the Wall Street Journal suggested Putin and Russia could go after Ukraine.

The most compelling of these new priorities today seems to be recovery of the assets lost in the Soviet Union’s collapse in 1991, which Vladimir Putin has called the “greatest geopolitical catastrophe of the 20th century.”

How does Russia achieve this goal? By dominating the domestic politics and, more importantly, economic- and foreign-policy orientation, of the former Soviet republics. Anything considered antithetical to Russia’s interests, as interpreted by the current Kremlin leadership, must be discarded — be it democratization, oil and gas exports that bypass Russia, and, especially, the membership in the Western organizations such as the European Union and NATO. And if, in the process, Russia must sacrifice most or even all of the fruits of the post-Soviet rapprochement with the West — including membership in the G-8, entry to the World Trade Organization or ties to the EU — so be it.

Russia’s “targets of opportunity” include simmering border disputes (and virtually all Russia’s borders with newly independent states could be disputed, since they are but the very badly demarcated internal borders of the Soviet Union), and the presence of the ethnic Russian or Russian-speaking minorities in neighboring countries.

Apart from Estonia and Latvia — where ethnic Russians constitute over a quarter of the population, but where NATO membership raises the risk for the Kremlin — by far the most likely target is Ukraine. Kiev has repeatedly defied and angered Russia by the domestic politics of democratization, a decidedly pro-Western orientation, and the eagerness of its leadership to join NATO.

And one more from Obama for America… 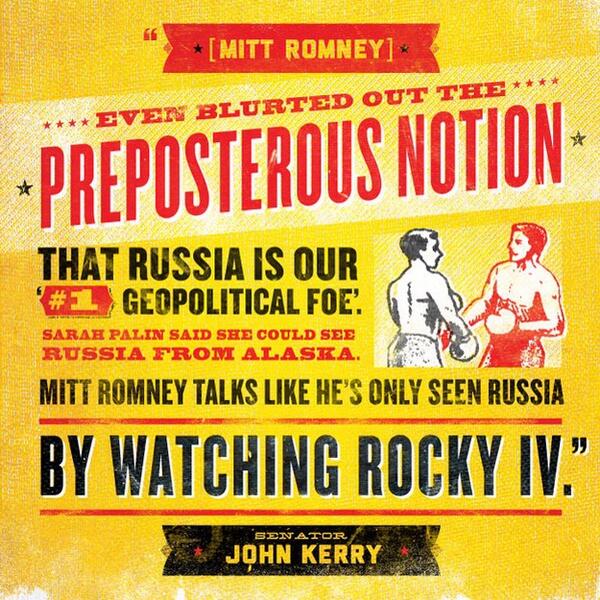 They Did It … Update – Bill Congress for commercials

Palin to step down as Alaska governor – video added

“Obama On Your Shoulder … Again”

Watching how the military reacts to the president
4 replies