Unfortunately, the toy set is currently unavailable and Amazon is unsure when it will be back in stock. For those of you looking for reviews on the item, many families were able to pick it up for Christmas and have thankfully posted full reviews so you’ll know if it’s worth the wait. 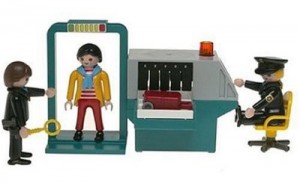 I don’t have any kids, but my wife and I do take the nephews and nieces to Florida to visit Disney during their ninth year. We think the TSA Security Check Point Toy Set (I’ve elected not to be compensated for this link) may be a good introduction to the flying experience.

Who cares about speaking with the captain of the plane and checking out all of the cool dials and buttons in the cockpit anymore … they don’t let you in the cockpit during the flight anyway.

But instead of simply being amazed with the thrill of accelerating down RWY 6 at BDL for departure on board a USAirways Airbus 320 … then breaking through the overcast at 8,000 on the way up to FL330 as we bank right and head south … you can go through the TSA “pre-flight” with the little ones and give them a glimpse into the world of long lines, strange requests, and strangers touching you using the backs of their hands while wearing latex.

Kids are cool with strangers touching them right?

Check out some of the reviews…

… My 5 year old son pointed out that the passenger’s shoes cannot be removed. Then, we placed a deadly fingernail file underneath the passenger’s scarf, and neither the detector doorway nor the security wand picked it up. My son said “that’s the worst security ever!”. But it turned out to be okay, because when the passenger got on the Playmobil B757 and tried to hijack it, she was mobbed by a couple of other heroic passengers, who only sustained minor injuries in the scuffle, which were treated at the Playmobil Hospital.
The best thing about this product is that it teaches kids about the realities of living in a high-surveillence society. My son said he wants the Playmobil Neighborhood Surveillence System set for Christmas. I’ve heard that the CC TV cameras on that thing are pretty worthless in terms of quality and motion detection, so I think I’ll get him the Playmobil Abu-Gharib Interogation Set instead (it comes with a cute little memo from George Bush).
Loosenut in Washington

This toy would be a lot more realistic with about 350 people standing in line for an average of an hour. It still makes a nice set with the interrogation room.
McKnight in the USA

… I purchased this item to teach my twins about what to expect at the airport and hopefully, alleviate some of their anxiety. We also downloaded the actual TSA security checklist from the American Airlines website and then proceeded with our demonstration. Well, first we had to round up a Barbie and a few Bratz dolls to play the other family members, so that cost us a few extra bucks at the Dollar General and it is aggravating that the manufacturer did not make this product “family-friendly.” Of course, since the playmobil Dad could not remove his shoes or other clothing items, unlike the Barbie, the playmobil security agent became suspicious and after waving her wand wildy a few dozen times, called her supervisor to wisk the Dad into a special body-cavity search room, (which incidentally led to quite an embarasing and interesting discussion with my twin daughters about personal hygiene and a slight adjustment to the rules we had them memorize about touching by strangers). But worst of all, since the suitcase did not actually open, the baggage inspector made a call to the FBI and ATF bomb squads which then segregated the family’s suitcase (which btw was the only suitcase they provided for our educational family experience) and according to the advanced TSA regulations, had to blow it up, …
Roxybeast in Oklahoma

And noname in Washington notes how well it worked for him as a training aid prior to a TSA interview.

I will never need to buy toothpaste again thanks to Playmobil. Not realizing this was a toy I purchased it to prepare for my interview as a TSA agent. Needless to say I aced it and have been happily viewing xrays of carry-on luggage and shoes ever since. As noted above, the free toothpaste is just icing on the cake – never expected a free lifetime supply, but who’s complaining. This is a “must-have” for any aspiring TSA agent out there.

We’re giving the product a rating of only two stars since the shoes do not come off and none of the dolls have underwear from what we can tell.

Somebody … please … give me a ROTFLMAO ….