How would you like a TSA screener to hold up a bag of cocaine and ask you where you got it when you never had it in the first place? Of course, privacy laws prevent the TSA from releasing the screener’s name and what discipline – if at all – he received.

The guy should be fired as far as I’m concerned, and he pulled this stunt less than two weeks after the failed attack on Christmas Day. Head to Philly.com to read the full story.

After pulling her laptop out of her [22 year-old Rebecca Solomon] carry-on bag, sliding the items through the scanning machines, and walking through a detector, she went to collect her things.

A TSA worker was staring at her. He motioned her toward him.

Then he pulled a small, clear plastic bag from her carry-on – the sort of baggie that a pair of earrings might come in. Inside the bag was fine, white powder.

She remembers his words: “Where did you get it?”

Two thoughts came to her in a jumble: A terrorist was using her to sneak bomb-detonating materials on the plane. Or a drug dealer had made her an unwitting mule, planting coke or some other trouble in her bag while she wasn’t looking.

She’d left her carry-on by her feet as she handed her license and boarding pass to a security agent at the beginning of the line.

Answer truthfully, the TSA worker informed her, and everything will be OK.

Solomon, 5-foot-3 and traveling alone, looked up at the man in the black shirt and fought back tears.

Put yourself in her place and count out 20 seconds. Her heart pounded. She started to sweat. She panicked at having to explain something she couldn’t.

Now picture her expression as the TSA employee started to smile.

Don’t forget the system is so messed up that 8 year-old Mikey Hicks is constantly hassled when he travels with his family by air. From the New York Times on Jan. 13.

After years of long delays and waits for supervisors at every airport ticket counter, this year’s vacation to the Bahamas badly shook up the family. Mikey was frisked on the way there, then more aggressively on the way home.

“Up your arms, down your arms, up your crotch — someone is patting your 8-year-old down like he’s a criminal,” Mrs. Hicks recounted. “A terrorist can blow his underwear up and they don’t catch him. But my 8-year-old can’t walk through security without being frisked.” 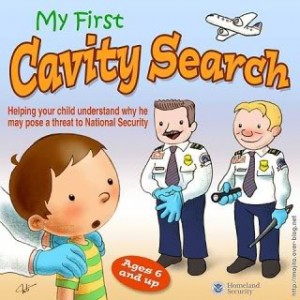 It is true that Mikey is not on the federal government’s “no-fly” list, which includes about 2,500 people, less than 10 percent of them from the United States. But his name appears to be among some 13,500 on the larger “selectee” list, which sets off a high level of security screening. …

Before leaving for the Bahamas on Jan. 2, she reached out to Congressman Pascrell’s office, which then enlisted a T.S.A. agent to meet the family at the airport. Even this did not prevent Mikey from an extra pat-down.

On the way home last Friday, Mikey’s boarding pass showed four giant red S’s at the airport in Nassau. “Oh, random screening,” Mrs. Hicks said. Mikey asked his mother not to worry and said he would use his tae kwon do — he has a junior black belt — if needed. Mrs. Hicks said she wanted to take pictures of her son being frisked but was told it was against the rules. …

Mrs. Hicks said the family was amused by the mistake at first. But that amusement quickly turned to annoyance and anger. It should not take seven years to correct the problem, Mrs. Hicks said. She applied for redress in December when she first heard about the Department of Homeland Security’s program.