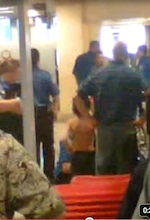 The video says it all … but this time the You Tube shooter provides commentary as well. Scary? You decide.

The vide was taken at Salt Lake City International Airport on Nov 19th, at least that is when it was posted. The shooter reports this:

Lets get the facts straight first. Before the video started the boy went through a metal detector and didn’t set it off but was selected for a pat down. The boy was shy so the TSA couldn’t complete the full pat on the young boy. The father tried several times to just hold the boys arms out for the TSA agent but i guess it didn’t end up being enough for the guy. I was about 30 ft away so i couldn’t hear their conversation if there was any. The enraged father pulled his son shirt off and gave it to the TSA agent to search, thats when this video begins.

This is crazy stuck on stupid. Want even more scary stupid. Read what happened to the videographer after he shot the video.

a black suit who had been talking with the other TSA officials approached me. He asked to speak to me and I obliged, wondering what was to come. He then proceeded to interrogate me about why I was videotaping the “procedures of the TSA”. I told him that I had never seen such practices before on a young child and decided to record it. The man being frustrated at this point demanded to know my plans with the video, of which I didn’t respond. Repeatedly he asked me to delete the video, hoping his mere presence could intimidate me to obey, but I refused. By this point it became obvious that he felt TSA had done something wrong and that I caught it on tape. After the interview, I left for my gate. I called my brother who told me I should put the tape on YouTube because this had been a recent hot topic in the news.
My gate was a long way off, but about 15 minutes after arriving 2 TSA agents came and sat 15 feet or so away from me. I stood up and moved so that they were in front of me and then took a picture. A 3rd and then a 4th agent came and sat down with the others.

OK, stop it. Really. You guys are cracking me up. This is a joke right. Push back?

Hillary Clinton to TSA: No, I would rather you not touch my junk, thank you....
Scroll to top