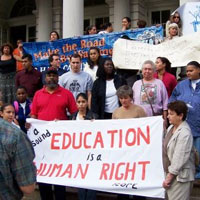 The following is a repost from March, 2010. The post was not shared on Facebook since we did not have that feature yet, but now I ask you share it via email, Facebook, Twitter or the social media distribution method of your choosing. Onward…

Health care is not a right. There, I said it. Our friend Prof. Walter Williams deserves the credit for pushing me to be blunt today, or maybe it’s just the nice San Antonio weather. Either way, a “right” can not be defined as one that diminishes the rights of another.

We must take steps to stop the abuse of the phrase “human rights.” Recently we’ve been discussing health care, but the same it’s-a-basic-human-right argument has been used to push everything from affordable housing, education, clean water, fresh air, a job that pays a living wage, and yes Internet access … not just dial up mind you, but broadband.

The problem with defining rights this way is each of the above require someone else to loose their own liberty or property. Williams has a great article on this subject today that I encourage you to read, but just for the heck of it, I’ll use my own example.

Let’s say your friends, neighbors and countrymen define a cell phone – with a good number of talk minutes and text messages – as a basic human right. Heck, everyone needs a cell phone for safety reasons, not to mention job hunters who need to be available all the time if an employer calls to offer a job … another human right.

After the legislation is passed, those who already have a cell phone and a few extra dollars in their possession, are each assigned a person in the area who needs a cell phone. Within days, that nice person knocks on your door and demands – nicely – the first of many monthly cash payments to pay for his or her phone service.

How would that plan go over? Not very well I would expect, but laws just like this one are being passed at the federal level on a routine basis. But the government is smart, instead of sending those in need of cell phones to neighbors to collect the cash, your support of programs like this are hidden in state, local and federal taxes, or through government business mandates which result in hidden taxes within product or service pricing.

To argue that people have a right that imposes obligations on another is an absurd concept. A better term for new-fangled rights to health care, decent housing and food is wishes. If we called them wishes, I would be in agreement with most other Americans for I, too, wish that everyone had adequate health care, decent housing and nutritious meals. However, if we called them human wishes, instead of human rights, there would be confusion and cognitive dissonance. The average American would cringe at the thought of government punishing one person because he refused to be pressed into making someone else’s wish come true.

Addendum, from the Declaration of Independence.

We hold these truths to be self-evident, that all men are created equal, that they are endowed by their Creator with certain unalienable Rights, that among these are Life, Liberty and the pursuit of Happiness. 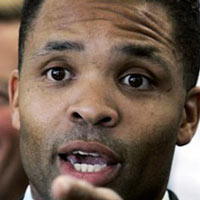 Rep. Jackson has the answer – amend the US Constitution to include everything!

Obama – “Health insurance … is your right”

The useful idiots behind the soda tax