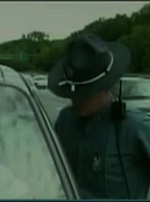 A Bay State Rep gets rear-ended by a suspected illegal alien and the perp responds by saying, come and get me copper. In any other state this is the kind of story that would come down on Governor Deval Patrick like a ton of bricks. After all, he’s the guy that made it illegal to check for illegal, you know what I’m saying. But the best part of this story is the absolute arrogance on the part of the alleged perp.

The suspect, 27-year-old Isaias Naranjo, was charged with driving under the influence of alcohol, leaving the scene of an accident and driving without a valid license. According to the report, when told of the serious charges he would be facing, he just laughed.

But because of action taken by Gov. Deval Patrick, state police were unable to notify immigration authorities that Naranjo might be illegal.

The governor’s aides are defending the measure, saying the department of correction can still pursue the violation.

As Glenn Reynolds would say, the nation is in the best of hands.

UPDATE: If you think this is not a serious matter think again. Or rathe ask the folks in Edmunds, Washington. From Weasel Zippers.

The KING 5 Investigators have learned that an illegal immigrant accused of raping a woman in Edmonds Sunday has been deported nine times. That’s much more than previously reported.

Immigrations and Customs Enforcement won’t comment on the case ofJose Lopez Madrigal. But KING 5 got the information through confidential sources and documents.

Larry Klein was the man who heard the alleged victim’s cries for help. Police say the suspect pulled the woman off the street to a dumpster and raped her.

Klein called police, who quickly arrested the suspect. But learning his identity took much longer because of some 30 aliases. It was only through fingerprints that they identified him as Madrigal, a Mexican citizen.

Obamacare: the news from Massachusetts just keeps getting worse

Are you in favor of “quality” health care?

Biden suggests Brussels, Belgium may be true “capital of the free wor...