For reasons that can only be explained if you are a government bureaucrat, New York City Mayor Michael Bloomberg has decreed that the New York City Marathon will take place this weekend as scheduled.  Manhattan Island is a mess in the wake of Hurricane Sandy.  Thousands are without power.  FEMA has sent generators to New York, but instead of using those generators to, let’s say, power a neighborhood, or power a gas station, or power a grocery store, Mayor Bloomberg has decided to usurp some of those generators and deploy them in Central Park…for the marathon.

He believes that running the marathon will bring “some sense of normalcy” to New York City residents.

I’m guessing that Gracie Mansion, the Mayor’s residence, has all of the above.

So, for the Mayor at least, let the games begin.

As for the citizens he promised to represent, “let them eat cake”.

Minutes ago, Hiz Honor cancelled the Marathon.  Now New Yorkers will just have to make due with…well, what they should have had in the first place. 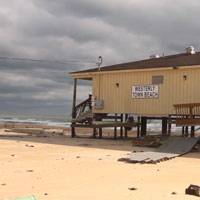