This my friends, is astroturfing. Just look at all the coordinated signs and T-shirts. Busloads of government union employees gathered in the Illinois state capital to demand lawmakers increase the income tax by 33 percent.

We’ve told you for years the current rate of spending at the federal, state and local level was unsustainable. Did state legislators listen? Did union management listen? Nope, they just sucked up cash not only by increasing salaries and benefits, but increasing the number of employees who were working for the government as teachers, social workers and other positions tied to unions. They also expanded the role of government everywhere, at every opportunity. 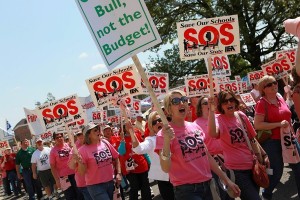 Remember the hogwash about the need for more teachers? Complaints about class sizes? The lack of funding for schools? Well, the amount of money spent per student certainly proved not to increase performance, and the performance of the economy – which has dried up their funding – has put them in an awkward position. But they feel empowered don’t cha know!

Administrations are out of cash. The states and communities made promises they are unable to keep, and since there are so many employees now working in the sector, they think they have the power to ride in with their matching shirts and signs and demand the state steal money from the private sector so they can be more comfortable.

From the Chicago Tribune, whose writers never bothered to ask how much the school budgets had been increased during the last 10 years, or how many students are enrolled as compared to 10 years ago. They also failed to ask where the money was supposed to come from. The unions don’t care, they just want their cash and benefits … they deserve it damn it!

Bus after bus pulled up on streets surrounding the Capitol complex and dumped sign-waving protesters clad in purple, green, red and blue shirts that represented a show of strength from a variety of public employee unions and dozens of groups that formed what they named the “Responsible Budget Coalition.”

Do these protesters – who are complaining left and right that their positions are being eliminated and their benefits are being cut – really want their own taxes raised? Hell no. That’s totally absurd! If they do get a tax increase of $100 per year, you can bet your own last dollar it will pay off for them!

Ask them. If we raise your taxes a few hundred dollars, would you be OK with keeping your same position at the same rate?

“These 177 people who have a job don’t want to do their job,” said Henry Bayer, head of the Illinois chapter of the American Federation of State, County and Municipal Employees, referring to the number of lawmakers in the House and Senate. “Yes people are hurting, that’s why we need a tax increase….If you try to leave town without doing your job we’re going to chase you.”

Chase you? What the heck does that mean?

Gov. Pat Quinn is pushing a 33 percent increase in the state income tax rate — taking it from 3 percent to 4 percent — to prevent cuts in state spending. Quinn has suggested that education will bear the brunt of the cuts, although that would have to be negotiated with the General Assembly.

Update: Just noticed Founding Bloggers asks the same question I did about “we’re going to chase you.”

Are families and individuals moving into higher income brackets?

The budget, the debt, the deficit, and what the law requires