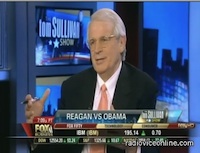 David Stockman a former U.S. Politician and Businessman served as Republican
Representative from the state of Michigan (1977-1981).  He then served as the
Director of the Office of Management and Budget during the Ronald Reagan’s First Term
in Office (1971-1985).

As mentioned in Jim’s Show this morning, Mr. Stockman had some dire warning
regarding the Economy.

This from Wikipedia regarding his Financial Legacy

President Jimmy Carter’s last signed and executed fiscal year budget results ended with a $79.0 billion budget deficit, ending during the period of David Stockman’s and Ronald Reagan’s first year in office, on October 1, 1981.[7] The gross federal national debt had just increased to $1.0 trillion during October 1981 ($998 billion on 30 September 1981). By 30 September 1985, four and a half years into the Reagan administration and shortly after Stockman’s resignation from the OMB during August 1985, the gross federal debt was $1.8 trillion.[8] Stockman’s OMB work within the administration during 1981 until August was dedicated to negotiating with the Senate and House about the next fiscal year’s budget, executed later during the autumn of 1985, which resulted in the national debt becoming $2.1 trillion at fiscal year end 30 September 1986 and becoming $2.6 trillion at fiscal year end 30 September 1988.[9]

As mentioned during today’s show here are some video clips that may just send a chill down your spine.

Connecticut says no to Obamacare ... yes to Blumenthal

What happened to "the deal"? Plus ... caption the picture contest

Obama has "Detailed plan to reduce deficit by $4 trillion"