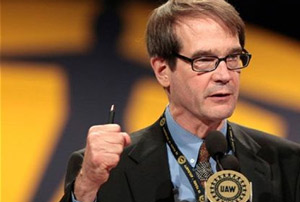 Bob King, President of the United Auto Workers, has announced a new strategy to increase members. On the “foreign” side he has decided that it is neigh onto time that Americans in this country making Nissans, or Hondas or Mercedes join the union.  Never mind that all attempts to unionize these workers in the past have failed (mostly because pay at these plants is on par with those of unionized plants), to Mr. King it will now be full steam ahead.

Early this year he sent a set of “rules” to each foreign manufacturer, and, if the company didn’t agree,

[t]he UAW, he said, would hold demonstrations at the corporate headquarters of these companies outside the U.S. as well as at their U.S. plants. In addition, it would picket their dealerships in the U.S. and abroad, and sports events globally that are sponsored by the car companies.

When that demand basically fell on deaf ears, Mr. King is now huddling with the UAW leadership to decide which foreign manufacturer should be the  “target” of his protests.  And, yes, it’s ok for the UAW to use that word because, well, they are a union.

So, it matters not to Mr. King that your spouse (who wouldn’t be unionized in any event), but happens to sell cars, for example, at your local Honda dealership will lose much needed income during these protests. It’s all about the union.

We’ll keep you posted on that emerging target.

Moving on to the domestic front, it seems that US auto manufacturers have actually turned a profit this past fiscal year.  And, the big three’s union contracts expire this year. To that, Mr King says,

Where we’ve given concessions, we’re going to try to get as many of those back as we possibly can.

Would those be the same concessions that kept Ford afloat, made it somewhat easier for the American public to swallow the GM/Chrysler government bailouts, and, enabled those companies to actually turn a profit?

Here’s an idea, Mr. King…any profits made by GM and Chrysler must first be used to pay back the American taxpayer in full.  Then you can claw back whatever concessions you want.

Cash for Clunkers, Part II — the Son of Clunkers

Who wants gasoline prices to rise?

Lieberman: Ya know, going into Syria may not be such a bad idea

Connecticut’s latest tax gambit: tax your movement in and out of the ...
Scroll to top