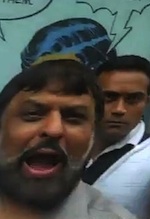 Is it wrong to tell the truth if it makes Islam or Muslims look bad?

“The questions appear to be simple. But they posed a challenge for the host of the new “Melissa Harris-Perry” show when guest Mona Eltahawy talked about her Foreign Policy magazine cover story about abuse of women by men in the Muslim world.

Eltahawy speaks from experience: She had her arms broken in a demonstration in Egypt and was tortured and raped in an Egyptian jail cell.

So she seemed surprised to find Harris-Perry questioning her right to draw attention to “traditions” such as involuntary female circumcision, wife-beating and childhood sexual abuse.”

Now, you’d think that the truth, whatever it may be, should be an affirmative defense, especially given the writer’s experience and bonafides.

“Then the MSNBC host brought in Harvard professor Leila Ahmed, who questioned whether Eltahawy should have written the article at all. Not because it was false, but because it made Muslims look bad.

“You began, Melissa, by noting that some things in the African-American community are not publicized precisely because of the racism,” said Ahmed as Harris-Perry nodded in agreement on a split screen.

“Mona, I appreciate what you do,” continued Ahmed. “I would love it if – I understand if you want to get your message across. It’s an important message. But if possible [you should not] give fuel, fodder to people who simply hate Arabs and Muslims in this climate of our day.”

Misogyny is the Islamic world – a truth that dare not be spoken.

For some people Memorial Day is every day
Scroll to top