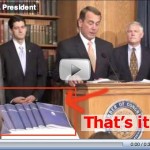 At first I was hopeful when I saw Michelle Malkin’s post on Thursday afternoon, but then I noticed the physical budget, The Republican Road to Recovery, that was put together in hours; my guess in response to Obama mentioning the lack of a Republican alternative.

The thing is so small I’ve got plenty of room to load it up to our Radio Vice Online server. If I presented this type of “budget” to my wife, I’d be laughed out of the room.

After weeks of promising a comprehensive alternative to the president’s budget that Republicans have painted as excessive, bloated and wasteful, Boehner was unable to provide specific information about their proposal.

His colleagues were unable to answer line-items questions as well. Boehner dismissed those details as “just a bunch of numbers.”

Even though aides insist that GOP leaders had no intention of releasing their full budget substitute, the press event was a public relations disaster.

“It looked like a disorganized blunder,” one GOP aide said. “It’s the worst messaging snafu at a time when the party can’t afford one.”

LGF calls it pathetic. Maybe the Republicans do not have the resources to put together a complete budget, but man, don’t be calling it a budget when it’s not a budget. Will conservative Republicans continue to let this stand? Should we expect more from the Republican National Committee?

AJ at Strata-Sphere now has some interesting commentary.

Bwahahaha! Al Gore Leaves His Lights On! Update: Manbearpig VideoWhich terrorists may be released in the USA?
Scroll to top