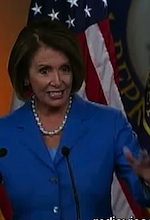 OK. I know you think this is a joke. But it’s not. It’s called re-branding. You know, Newer, bigger, with special enzyme dirt fighting yada, yada, etc, etc. Again this is not a test. Watch the video for yourself.

Madam Speakah met with the press today to guarantee that the Bush tax cuts would be extended but just for the middle class … not for millionaires and billionaires or $200,000 aires either. But the middle class cuts put in place in 2001 and 2003 by George W Bush will be extended. And oh yes. They will henceforth be referred to as … well watch for yourself.

Of course MSNBC got the memo in advance. Here’s Chuck Todd on Hardball NBC News two days ago. But then they were calling them the “So called, Bush cuts.”

Here’s the problem. The number of Democrats who have lined up against raising taxes on upper incomes is beginning to grow in Congress. I think the number is over 30 now. But I’ll check that.

A 60 Minutes investigation of Pelosi?

What do the simple folk do? Plus Nancy’s enormous gavel