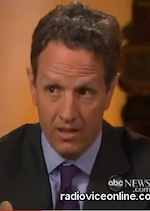 With the war on the rich, big oil, women and the Supreme Court not gaining enough traction, last week the administration tacked in a different direction…home mortgages.

First, let me give you a bit of background.  Ed DeMarco was given the thankless job of conserving the assets of Fannie Mae and Freddie Mac until Congress could figure out to do with them.

So far, he has

But, that wasn’t good enough.  The administration and Democrats in Congress have been demanding that Mr. DeMarco “write down principal” on loans.  In other words, if your home mortgage held by Fannie Mae is, say $100,000, Fannie should send you a letter saying that your mortgage is now only $50,000.  Mr. DeMarco has consistently refused those demands, arguing that such a move would deplete the very assets he was directed to conserve.

Throwing him out would create a fire storm of criticism, so, the administration has come up with a new idea, thanks to the quick thinking of Treasury Secretary, Timothy Geithner.  Here is the new plan…

Treasury has some $20.9 billion in leftover TARP money.  Treasury will transfer a large chunk of that money to Fannie and Freddie who will then use it to subsidize the write downs of mortgages under the administration’s Home Affordable Modification Program, aka, HAMP.

Instead of using TARP money to reduce the [current year’s] $1.3 trillion federal deficit, Mr. Geithner now wants to hand it to [Fannie and Fredie] so Mr. DeMarco can’t object to principal writedowns…Treasury and President Obama get their election-year bailout without having to fire Mr. DeMarco.  The big losers are taxpayers–and Americans foolish enough to make their mortgage payments on time.

To me, this is “trolling for votes” at its lowest.

The Fannie and Freddie political football

Finally, an EPA regulation that will cost business nothing

Buffet’s company sued for back taxes
Scroll to top