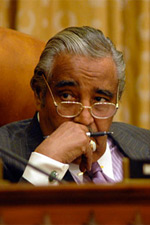 I’m happy that House Speaker Nancy Pelosi (D-Calif.) has been able to get through all of the red tape and finally work towards her pledge to fight ensure Congressional ethics. Funny though, she’s been unusually quiet about Rep. Charlie Rangel (D- N.Y.), maybe she should make a big splash by walking down Pennsylvania Avenue with a broom.

Sweep the corruption out of Washington, D.C. madame speaker! That’s it … sweep it all out. That’s the ticket!

Pelosi has not really been completely mute on Rangel. Her spokesman noted “The action today would indicate that the independent, bipartisan ethics committee process is moving forward”. Oh, good.

From the Washington Post, with my emphasis in bold.

A House ethics subcommittee announced Thursday that it found that Rep. Charles B. Rangel violated congressional ethics rules and that it will prepare for a trial, probably beginning in September. The panel is expected to make the details of his alleged violations public next Thursday.

Rangel (D-N.Y.) has been under the House ethics committee’s microscope since early 2008 after it was reported that he may have used his House position to benefit his financial interests. Two of the most serious inquiries have focused on Rangel’s failure to declare $239,000 to $831,000 in assets on his disclosure forms, and on his effort to raise money for a private center named after him at City College of New York using his congressional letterhead. …

… Rangel has spent more than $2 million from his campaign treasury on his legal team, including more than $160,000 this spring, according to federal election reports.

From the New York Post, again with my emphasis in bold.

Among the most serious charges that have been aired against Rangel — first disclosed by The Post — was his failure to report and pay taxes on rental income from his villa in the Dominican Republic.

The Post later revealed that Rangel also didn’t report hundreds of thousands of dollars in assets and income on the financial-disclosure forms he has filed with Congress each year.

And Rangel has been accused of soliciting large corporate donations for a center named after him at CCNY while heading Ways and Means.

He also was found to be maintaining four rent-regulated apartments in Harlem, as well as preserving a tax shelter for an oil-drilling company, Nabors Industries, whose CEO had donated to the Rangel Center.

First of all, he very honorably served in the United States Army, earning the rank of Staff Sargent while serving in the Korean War between 1948 and 1952. Rangel was awarded both the Bronze Star and Purple Heart.

After the war, he returned to New York, completed high school and college and by 1960 he had earned his JD from St. John’s.

Between 1960 and 1970, Rangel was an attorney, including serving as an Assistant US Attorney in New York and eventually got into politics as early as 1966.

I’m going to have a little fun with the Congressman here, so don’t go all freak-out on me. Here’s a screen shot of the right column on Drudge this morning. 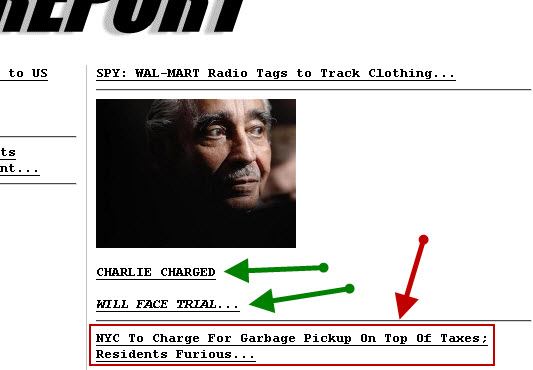 Evan Bayh – Congress has not created one new job

I’ll take one of these please … Basil Marceaux for Governor

Christie to Tapper: We’re just getting started
Scroll to top