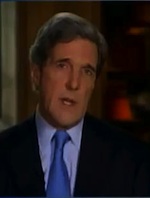 The Sunday Morning talk shows were a blame game fest and frankly at this point it’s become obnoxious. Don’t you think. But the facts are simple … someone should tell these clowns Bush is not in charge of the clean-up … Obama is. He said so.Yes we have already heard this from Senator Chris Dodd (D, Countrywide) but the hits keep on coming. First up, from ABC’s This Week … Senator John Kerry. Listen as he stumbles and fumbles his way through his defense of Obama. Hey, it’s about the cleanup, Sally.

If you still have brain cells left, fasten your seat belt for Arianna Huffington. It’s Bush and Cheney’s fault … oh, and Halliburton.

Never let facts get in the way of a good story. And while the reasons behind the collapse of the New Horizons rig need to be discovered, right now it’s the handling of the clean-up that is the number one issue along the Gulf … and I would say the President gets a less than passing grade … even on the curve.

Red State does a good job of detailing drilling safety under George Bush.

President Obama and Interior Secretary Salazar have done their best to shift the blame of the Deepwater Horizon disaster to the Bush Administration and the supposed ‘cozy relationship’ it fostered between the Minerals Management Service and the oil and gas companies it regulates.

The public consciousness perceives a corrupt and incompetent agency, turning a blind eye to the shenanigans of their industry buddies.

But isn’t a pause in order? Or does a pause actually mean an end to drilling? You tell me.

Helen Thomas tells Israeli “occupiers” to go back to Europe, then...

Obama: Bloom off the rose … continuuuuuuued
Scroll to top