Warning! Danger! The evidence continues to pile up and hopefully its not too late. Earth is … cooling. The polar bears are safe … but not so much the tourist industry on Cape Cod. We need to stop these idiots before a: they send us into another ice age, b: tax us into oblivion, c: all of the above. From Gateway Pundit and Climate Depot.

According to the latest global satellite data courtesy of the University of Alabama in Huntsville and made into an easy to read graph by algorelied.com: “For the record, this month’s Al Gore / ‘An Inconvenient Truth’ Index indicates that global temperatures have plunged approximately .74°F (.39°C) since Gore’s film was released,” noted algorelied.com. (See satellite temperature chart here with key dates noted, courtesy of www.Algorelied.com – Also see: 8 Year Downtrend Continues in Global Temps)

Here’s a pictorial courtesy of the National Snow and Ice Data Center, University of Colorado via www.globalwarminghoax.com. 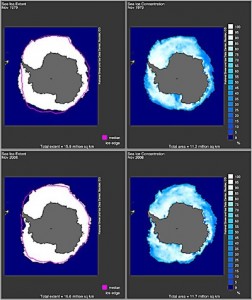 Steve pointed me to an American Thinker article on this which I think sums it up pretty well.

While other western countries are dumping this fraudulent Global Warming scam as fast as they can, in an attempt to undo the grievous economic harm done by their own versions of Cap ‘n Trade, our Congress jumps on the climate-god bandwagon with pious pretense and brains of pure mush. Meanwhile, New England has just reported the coldest June on record, while the Global Warming hoax is revealed as a pile of pure poppycock by more real scientists every single day. This Congress and their pagan-god delusions have got to go.

Tracking your carbon footprint: every move you make, every breath you take

There has been no increase in CO2 since 1850