I’ve written frequently about decisions that must be made when costs increase for owners and managers of business. Increased costs include mandated government minimum wages, and Ball State University recently published a policy brief on who lost the jobs when the minimum wage increased.

Michael J. Hicks, PhD and director of the Center for Business and Economic Research and an associate professor of economics at Ball State University writes about the economics of the minimum wage in February. Hicks notes that in the past, raising the minimum wage had little effect on anything – including the standard of living – simply because the wages being paid were already higher than the mandated rate. But things change in a recession.

[T]he latest round of minimum wage increases, which occurred in late July 2007, 2008 and 2009, occurred from the peak through the trough of the recession. These increases were, at 14, 12 and 11 percent respectively, the largest since 1978 and the largest three-year percentage change since 1950. These changes were not fortuitously timed to have a benign effect on employment.

Casey Mulligan, a professor at the University of Chicago, implicated the minimum wage in the sharp decline of part-time workers in the latter half of 2009. His analysis of the actual versus forecasted gap between part-time workers increased sharply in July 2009 when the most recent minimum wage increase was enacted. This was surprising because part-time employment often rises as full-time employment declines. Mulligan reports that the loss of five full-time jobs during a downturn typically increases art-time employment by one position. This relationship stopped in July 2009. 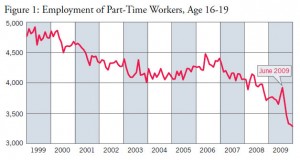 Take a close look at the chart to the right and note the significant drop in employment of teenagers after the June 2009 federal minimum wage increase. To a certain degree, Hicks does suggest that a minimum wage can have benefits, but he also notes abandoning the minimum wage would have “little or no adverse economic effects.”

In reality, the minimum wage has never produced an economic benefit that I am aware of. If the market required a higher wage standard, that wage was paid by employers with staff making more than the prescribed minimum. But when the minimum wage mandated by states and the federal government exceeds the market rate, it can and has spelled disaster for low income earners – especially teenagers.

Remember, when costs go up businesses have hard decisions to make. It’s not rocket science at all … employers must absorb the costs themselves (reducing future investment, paying themselves less), increase costs paid by consumers, and/or cut wages, benefits and head counts of employees. In almost every case, it’s a combination of all three moves, none of which are any good for owners, employees or customers.

It’s true an increase in the minimum wage will have some sort of psychological effect on those earners, but the economic impact is a wash, since those earners are paying more for goods and services (overall) as a direct result of increased costs to all businesses, not just one industry.

Minimum wage laws keep new workers from gaining skills in entry level jobs needed to be successful. Lawmakers may mean well when they pass minimum wage laws, but they hurt the very people they intend to “help.”

Cap and Trade is a cap on our economic growth

Obama administration will ask to raise debt ceiling $2 trillion – What would China do?

Obama nominates yet another aide to deal with the economy

Good thing we did that stimulus, huh? Update: Video