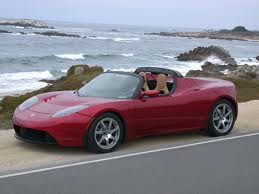 Look, I’m totally fine with new technology, heck, I’m a technology freak, but it does not look like Tesla’s battery pack is ready for prime time.

What it comes down to is this. If the power goes out here at my house for six or seven days (yeah, it happened) and my $100,000-plus Tesla Motors Roadster had just returned from a trip where the battery had been mostly drained, it’s possible the battery in the vehicle would be completely discharged by the time the power came back on at my house.

No big deal right? Well, not exactly. You might not be able to recharge the battery, and that could cost you $40,000 to fix.

[Tesla] cars all share the same battery pack design, which apparently has a major flaw, or at least a giant caveat.

The problem? The vehicle’s battery pack, should it ever become fully discharged, will not charge back up. The only thing most of us can compare this sort battery issue with its computers and other gadgets. If your notebook battery refuses to charge up, it costs you a few hundred dollars at most to replace it. If the battery on your Tesla vehicle refuses charge back up, well, then, you could be looking at a cool $40,000 to get your car running again. Consider that this car sells in the six-digit range, the battery pack is obviously a huge chunk of the overall cost.

There is a 3 year, 36,000 mile bumper-to-bumper warranty, but unless you pony up the extra funds for an extended warranty, the battery is not covered after three years. Tesla estimates the battery will last about 100,000 miles and after that, you might as well junk the car and the battery alone costs $36,000 plus labor to install it.

Correction/Update: From the Tesla’s owner manual, with my emphasis in bold.

Caution: If the Battery’s charge level falls to 0%, it must be plugged in immediately. Failure to do so can permanently damage the Battery and this damage is not covered by the New Vehicle Limited Warranty. Also, if you allow the Battery to fall to a critically low level it may not be possible to charge the vehicle.

Tesla batteries can remain unplugged for weeks (even months), without reaching zero state of charge. Owners of Roadster 2.0 and all subsequent Tesla products can request that their vehicle alert Tesla if SOC (state of charge) falls to a low level. All Tesla vehicles emit various visual and audible warnings if the battery pack falls below 5 percent SOC. Tesla provides extensive maintenance recommendations as part of the customer experience.

OK, sounds good. But what if the battery does hit zero percent charge? It’s bricked. Dead. Tesla does not dispute that fact, and it will cost you somewhere in the range of $40,000 to fix the issue. If I have no power at the house and the thing is screaming at me that it’s about to die, what am I supposed to do? Call out for a trailered generator that can pump out 240 volts to bring it back to life before it dies for good?

It’s interesting to note the Chevy Volt and Nissan Leaf are set up to never hit zero percent charge.

Again, I’m all for cool new technology, but I’m willing to wait until the price is right and the value is there. That said, I’m furious the federal government and the Department of Energy has provided billions of guaranteed loans to companies including Ford, Tesla, and Nissan to fund these projects. It’s flat out unconstitutional. Tesla received more than $400 billion in 2009.

Lookin’ on the bright side I guess.

Some states blocking Tesla from selling cars through stores

Electric cars and your money
8 replies

Contraceptive mandate and the First Amendment
Scroll to top