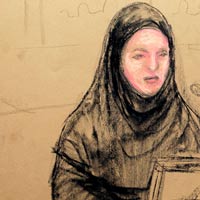 If you were concerned the trail of Khalid Sheikh Mohammed in New York City would be a circus, don’t be disappointed, there is still hope. The self-proclaimed mastermind of the 9/11 attacks in New York and Washington D.C., along with four co-conspirators have been charged with 2,976 counts of murder at a military tribunal at Guantanamo Bay, and it’s all that we expected.

Just on the first day, the hate-filled Islamic Fundamentalists proved any trial at any location, at any time would be used to insult non-believers and shove their radical views into the faces of everyone in the court and those watching on video feeds.

The first thing we learn about the tribunals – and who didn’t know this was going to happen – is that the five accused are determined to interrupt the proceedings as frequently as possible and they are refusing to cooperate or answer any questions. From the Wall Street Journal.

The hearing quickly bogged down before they could be arraigned. The men took off the earphones that provide Arabic translations and refused to answer any questions from the judge, Army Col. James Pohl, dramatically slowing a hearing that is heavy on military legal procedure.

At one point, two defendants got up and prayed alongside their defense tables under the watchful eyes of troops arrayed along the sides of the high-security courtroom on the U.S. base in Cuba.

Prisoner Walid bin Attash was put in a restraint chair for unspecified reasons and then removed from it after he agreed to behave. Lawyers for all defendants complained that the prisoners were prevented from wearing the civilian clothes of their choice.

Through much of the session, the defendants seemed to be trying to give the impression they were in a different world than the rest of the court.

I’m sorry, what did the prosecution expect? But it even gets more interesting, as the female attorney for one of the defendants demanded women who are in the courtroom “wear more appropriate clothing to the proceedings — out of respect for her client’s Muslim beliefs“.

Cheryl Bormann, counsel for defendant Walid bin Attash, attended the arraignment Saturday dressed in a hijab, apparently because her client insisted on it. She further requested that the court order other women to follow that example so that the defendants do not have to avert their eyes “for fear of committing a sin under their faith.”

At a press conference Sunday at Guantanamo Bay, Bormann said she dresses in a hijab at “all times” when she meets with her client “out of respect” for his beliefs. Asked why she requested other women do the same, Bormann said, “When you’re on trial for your life, you need to be focused.”

Since the defendants don’t want to participate, are socializing with each other, ignoring the proceedings and obviously determined to create a circus-like atmosphere, the judge must send them back to their cells and let them listen to the trial’s audio feed from there. Trust me, these terrorists couldn’t give a damn about what’s happening, they are just taking every opportunity to screw with the system.

Try them, convict them, hang them and be done with it.

Kroft to Obama: Are you punch-drunk? Video Update