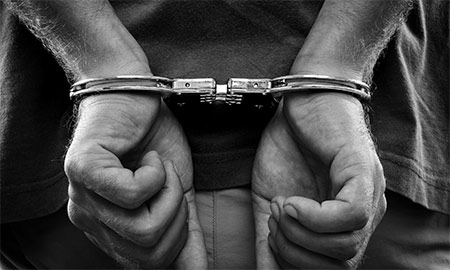 The judicial system and politicians who are in favor of a second, third and/or a fourth chance society are partly to blame for this. Although you may hear differently, trust me, nobody is in prison for “smoking a little weed,” but there are criminals who should be locked up, yet are let go with low bail or their own recognizance over-and-over again.

The career criminal who killed Auburn, Massachusetts Police Officer Ronald Tarentino Jr. early this week had a long criminal history. The convict was 35 and started his adult criminal career at 17. With 27 court appearances, he logged 20 misdemeanor convictions and TEN felony convictions. Who knows what he did as a “youthful offender.” Just this year… From the Boston Herald…

On Jan. 25, he was arraigned on charges of assault and battery on a police officer and resisting arrest after allegedly grabbing a cop by the shirt and trying to pull him into a car with a large pit bull inside. In a hearing that lasted just over a minute, he was released on his own recognizance by Judge Paul L. McGill.

On Feb. 11, he [was] charged with assault and battery on a family member for allegedly punching a woman in the face on the side of Interstate 495, as well as resisting arrest and driving with a revoked license. He was released by Judge Andrew L. Mandell on $500 cash bail. Prosecutors had requested that his bail on a prior offense be revoked, a request Mandell denied.

On May 11, he appeared in court for a probation violation hearing after failing numerous drug screenings and missing appointments with his probation officer; the hearing lasted less than one minute and he was ordered to return to court June 9.

On May 16, he was arrested in Worcester for driving an unregistered vehicle with false license plates on a suspended license; he was arraigned that day and released on his own recognizance by Judge Janet J. McGuiggan. Prosecutors did not seek bail.
Six days later, he shot and killed Tarentino.

This criminal – like many others – are given opportunity after opportunity to “turn their life around.” It’s over… it’s got to stop.

Hartford Courant OpEd: 2nd Amendment does not include “assault rifles...