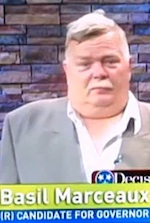 Ahhh. It’s over. The Man who would stimulate the economy by planting grass in empty lots, and make everyone carry a gun or face a fine, why he even offered to be any state’s Governor if he could fix it, lost yesterday’s primary vote in Tennessee.

According to the Associated Press, poor Basil Marceaux did not even garner 1% of the vote.

Hey. He did get 3526 people to vote for him. On a … ummm … different, and may I say very straightforward  platform. Not bad! Or is it? AP at Hot Air has a pretty funny “tongue in cheek” take on this whole episode.

Which, of course, is outrageous. If Alvin Greene can pull a fifth of the voteversus Jim DeMint, surely five percent of Tennessee Republicans should be willing to toss this poor guy a confidence-boosting vote as thanks for all the fun he’s provided the last few weeks.

Or maybe not tongue in cheek. Al Greene is in the race in SC. Basil never got out of the gate. As for the winner

With all of the state’s precincts reporting, Haslam had 47.5 percent of the vote as he defeated Congressman Zach Wamp and Lt. Gov. Ron Ramsey.

Haslam, who helped fund some of his own campaign, will now face Mike McWherter, a Democratic businessman and son of a former governor. The race is to succeed Gov. Phil Bredesen, a Democrat, who is prevented by term limits from running for a third term. Political handicappers think Republicans have a good shot at winning back the governor’s

Interesting, or maybe not so much, that the Democrats have put up a small businessman promoting private sector jobs. Religion is a funny thing. Conversion often comes when your life is on the line.

I'll take one of these please ... Basil Marceaux for Governor

See You in November ... the musical

A prophet among us
Scroll to top