Sound off in this open thread. I’ve been thinking about the concept of electability for the past couple of days. I tend to look at policy positions and leadership qualities more than personal backgrounds and style. It’s not that the other stuff is unimportant, rather I tend to look for a conservative leader that can move us in the right direction.

No limit on the comment length for this post, but come up with some good stuff instead of fluff OK? Try to keep your answers to less than a couple of paragraphs and there is no need to restate what someone else said. “I agree with so-and-so and would add…” works just fine. 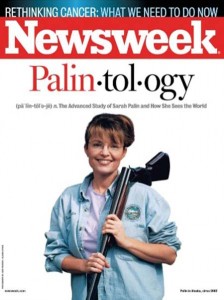 So again … the question is … Why is Sarah Palin not electable? (Answer in the comments section below)

There are a bunch of possible candidates one could say are unelectable. Think of Newt Gingrich. Many will point to his multiple divorces and marriages and some will point out his few minutes on the beach sitting on that couch with Rep. Nancy Pelosi (D-Calif.). Fair enough to point out Gingrich’s environment position but failed marriages? Come on now … we eliminate half the US population if we make an issue out of that subject.

How about Herman Cain? I could say he’s unelectable since he has no political experience as a candidate for any office and few “independents” know who he is.

Nobody is perfect and if we’re looking for that perfect candidate, we’re going to be looking for a long time.

Again, this post is specific to Palin and is a direct result of what I’ve seen with the Hot Air polls since the November 2010 election. The post is also the result of comments posted here and others I have read who “cringe” when they think about her running. Few if anyone mentions anything other than Palin “quitting” as Alaska governor “for no good reason” which is total bull in my opinion. What else do you have?

So what say you … why is Sarah Palin unelectable?

Video: I Am Sarah Palin

Palin on energy: The cap and tax dead end

WaPo: Another Palin Scandal? Umm …not so much.

Atlas is Shrugging – The Video