Don’t miss any opportunity to point out you need more cash for your school system. The president of the Philadelphia Federation of Teachers union had a statement to make after an 8th grader beat the crap out of a science teacher.

We need more union dues-paying members to hold the thugs at bay. At least that’s what his statement sounded like to me. Background…

School district spokesman Fernando Gallard says eighth-grade science teacher Lawrence Williams got into an argument with a student, and the student attacked the teacher.

The teacher suffered a swollen eye, lip, and other head injuries. He was taken to a local hospital, in stable condition, and later released.

The statement from Jerry Jordan, the union rep, with my emphasis in bold.

There is absolutely no place for violence in our schools. It is unacceptable under any circumstances for a student to lay a hand on anyone, but especially a teacher or school employee. Schools must be safe for students and staff.

With the elimination of support staff – classroom assistants, non-teaching assistants, nurses, counselors and school police – the district has reduced the adult-to-student ratio and the ability for remaining staff to control school climate adequately. The district is moving in the wrong direction when it comes to school safety.

Schools are safe because of the steps we take proactively – because we have appropriate staffing levels in schools, we use proven anti-violence and anti-bullying programs, we provide training so that staff can work effectively with disruptive children and because we offer appropriate alternative placements for disruptive or violent children.

Continued cuts to the staff assigned to schools to make them more safe shows me that the district hasn’t learned the lessons it should have learned five years ago this month, when a Germantown High School teacher’s career was ended by a brutal student assault. Teachers and staff have to know that support personnel is available when they need it.

What was the staffing level five years ago? The first part of his demands – they really sound like demands – imply recent cuts have caused this issue to become a problem. Then he mentions an issue five years ago.

Let me give Jordan a tip … it has almost nothing to do with staffing levels. The brat knew he could get away with it and knew the teacher could not fight back. If he did, he knew he’d get a big pay day from the school system. 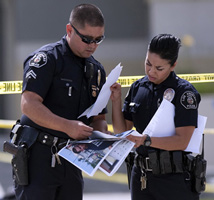 The state and abortion: the shape of things to come?

Chicago school violence – where are the community organizers?

One dead, one injured in Chicago school stabbing
8 replies