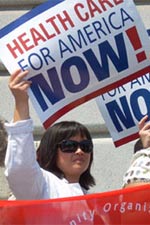 I mentioned health care mandate waiver requests on Oct. 6 (two days ago). The big discussion was centered around McDonald’s and their mini-med health care programs that would not meet medical loss ratio requirements in the law. Now we learn a branch of the American Federation of Teachers – who campaigned and donated big dollars in support of Obamacare – requested a waiver since some members would lose their health insurance.

So the Obama administration can apply – or not apply – the law at it’s discretion? Two thousand-plus pages of garbage federal law that nobody has read or understands … and this is what we get. Just another symptom of the disease.

At about the same time my post went up Wednesday morning, Michelle Malkin noted McDonald’s was not alone. Many other groups, including the teacher’s union in New York City, got a waiver.

Of course, the Obama administration defended their position on granting waivers to whomever they like. Health and Human Services Secretary Kathleen Sebelius is the one with that power … and she’ll yield it as she sees fit, damn it!

Today, Kyle Olson at Big Government notes the true hypocrisy, with my emphasis in bold.

ObamaCare was such a great idea at the time – the AFT [parent organization of the NYC United Federation of Teachers] gave hundreds of thousands of dollars to Healthcare for America Now, the leading organization pushing for the government takeover of health care.

It was announced Thursday that the UFT has requested and received an Obamacare-waiver after it discovered their members would end up losing their health insurance plans.

A New York teacher named Liza Frenette wrote the following on the NYSUT (New York State Union of Teachers?) website. NYSUT is affiliated with the American Federation of Teachers, National Education Association and the AFL-CIO.

Myth: Health care reform will force you out of your current insurance plan or force you to change doctors.

Fact: You can keep your existing insurance; reform will expand your medical options, not eliminate them.

I wonder if Frenette got a waiver? 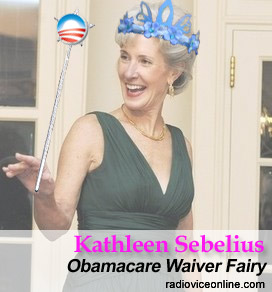 Update: A comment from “Mrs. Tink” over at a forum I occasionally lurk at (Glock Talk)…

Kathleen Sebelius is an embarrassment. First, she warns companies off telling the truth about Obamacare, threatening tangible repercussions. Then, she goes around like the Waiver Fairy, waving her magic Obamacare wand and spiriting companies out from under the Umbrella of Oppression. Unbelievable.

Aha! Waiver Fairy … we have a winner!