A year ago about 150 people showed up for the first Connecticut Tea Party in front of the Capitol Building. Just  few months later more than 3000 made their way to the capitol and the movement in New England took off.

Yesterday 300 turned out for the one year anniversary of the people’s movement, in part to let the representatives know we’re still around, and in part to celebrate the achievements of young and growing grass roots movement.

Catch the pictures, read the signs and watch the video. Hint … there’s a special message that went out to “Eensy weensy” Nancy. 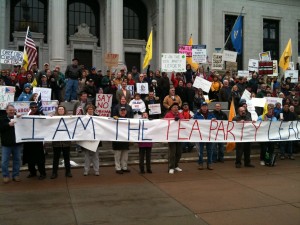 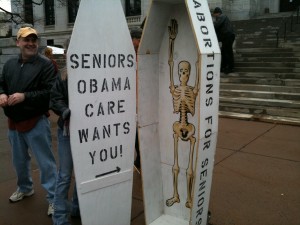 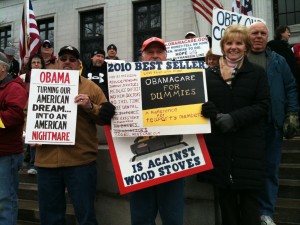 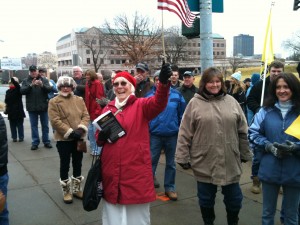 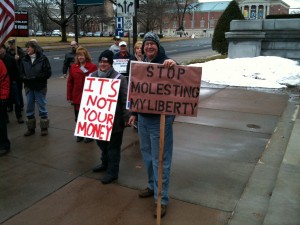 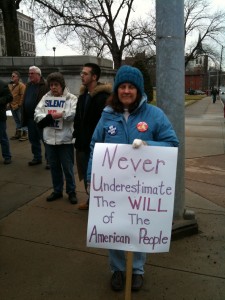 UPDATE: Tea Party success does not necessarily mean that ultimately we will win the Federal Health Care battle … and if you want to know why … Ed Morrissey argues that ultimately Democrats could very well choose to ignore Americans and ultimately end their careers in Congress by passing this bill.

Andy [McCarthy]has a point.  The American political system has remained stable mainly because its political parties have remained rational over our history.  That rationality has been mainly based on the accepted principle that there isn’t more to power in our system than winning elections, which can create short-sighted leadership at times, but also discourages sweeping  changes to the country by a party on a political suicide mission.  A party with a leadership of zealots, though, could choose to use a two-year session of Congress to fundamentally remake America if it accepted a humiliating loss of power as the necessary trade-off.

Read the whole thing, because Ed argues there’s good reason to hope Democrats wake up and listen to Americans. Still we must continue to push back. It’s a bad bill that overreaches and is too intrusive, not mention we are asking our children to pay for our healthcare. It must be stopped … and eventually, my guess, unraveled.

Tax dollars at work? – NPR “learns you to speak teabag”

Matthews: Without progressives America would be … Calcutta?
7 replies

Thank you from SoundOffSisterObamacare: the continued “insurance premium” spin
Scroll to top