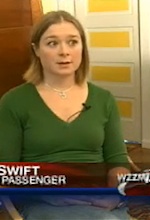 Here are a couple more TSA nightmare stories with video for you. My guess is when the TSA grabs your groin and squeezes so hard you get lifted into the air … that’s too far. Ya think?

The first story is from Grand Rapids, Michigan. A woman who likens her TSA experience was so violent she cried.  Click the pic to watch. But here’s the transcript.

Swift says they told her she was singled out because she was wearing a skirt. She says the search earlier this month was very rough and left her in tears.

“The female officer ran her hand up the inside of my leg to my groin and she did it so hard and so rough she lifted me off my heels,” she says. “I think I yelped. I was in pain for about an hour afterwards. It just felt excessive and unnecessary.”

After reviewing the incident, a TSA spokesman says officers involved in the Grand Rapids search acted “appropriately and respectfully.” 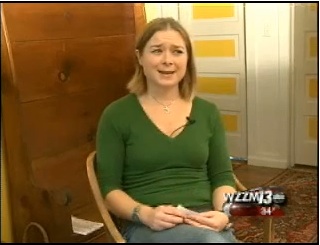 Story number two comes from St Louis who likened her “pat down” to sexual assault. From KMOV in ST Louis.

From KMOV in ST Louis.

Moroney explains “Her gloved hands touched my breasts…went between them. Then she went into the top of my slacks, inserted her hands between my underwear and my skin… then put her hands up on outside of slacks, and patted my genitals.”

“I was shaking and crying when I left that room” Moroney says.  “Under any other circumstance, if a person touched me like that without my permission, it would be considered criminal sexual assault.”

As the ACLU points out in this story there are no laws governing pat downs so TSA officials can pat down anyone for any reason and set their own standards for a pay down. We give up our fundamental rights way too easily in this country especially when there are other ways.

DHS could require that Airports be in charge of their own security, or could assign highly trained screeners to stand at the gate or at the counter. It would require profiling. No, not Muslim profiling. Watching people, and how they act, how they purchase their ticket, whether it’s round trip or one way … with bomb sniffing dogs everywhere. Expensive? Probably, since it would require police investigation training. But then at least a pat down would come because of reasonable cause.

How far do we let this go? Above stories via Drudge.

The TSA goes T and A … or why we saw this coming months ago.

Right Scoop: 4 year old sees his baby sister … before she was born