You are here: Home1 / teleprompter

As Campaign Spot’s Jim Geraghty said this morning on the show … it just hasn’t been the same since he had his leg amputated. Another Chris Classic. END_OF_DOCUMENT_TOKEN_TO_BE_REPLACED

… and make the woman at the CNBC town hall meeting his campaign manager. It is a rare moment on tape from the MSNBC crowd. Clearly they see the young President is out of touch with America, which of course can happen when your idea of a quick getaway is a cookout with Oprah and the NBA crowd. Or maybe its the traveling chef he brings with him on vacations? Or maybe it’s the vacations, or the parties or the … oh never mind. Line of the day: “She’s better then he is.” Indeed. END_OF_DOCUMENT_TOKEN_TO_BE_REPLACED

Horrifying! TOTUS has been there for this guy at some of his worse moments, and yet he has hung in there. Trip on a syllable, no problem. TOTUS kept rolling. Stumble on an market economy point you never quite understood, TOTUS did. Now Matthews wants him gone. Oh the humanity. END_OF_DOCUMENT_TOKEN_TO_BE_REPLACED

From Drudge … TOTUS arrived on the hill shortly after 2PM.

Don’t let us down buddy. We saw you collapse from exhaustion, we watched as you stopped and let the big guy try to fly on his own. But now is the moment. Now is the time. Now is the time to slip a belt, flash a diode, fry a circuit. Not for any nefarious purpose. Just to see if the big guy really knows his stuff … or is just reading. Win one for the gipper. 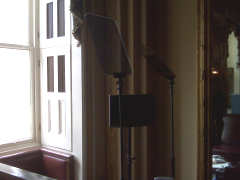 Update: This will teach me to joke around without checking the other sites. Allah at HA actually has Andrea Mitchell pondering the same situation. Yikes … me … thinking like Andrea Mitchell. But what would cause her to ponder such a thing. Obama is not Bush. He’s the best at evvvvvvvvverything. Guess the MSM has its doubts now too.

Sacre bleu! TOTUS finally reached the breaking point and joined his cousin TOVPUS and crashed to the floor in the middle of the President’s address on urban policy. Perhaps it was exhaustion. Perhaps it’s revenge. END_OF_DOCUMENT_TOKEN_TO_BE_REPLACED

Not in good form to make fun of the boss. Not at all. First TOTUS’ brother TOTVP falls down stopping Biden’s commencement speech at the Air Force Academy … then Biden says this … oh and I’ve included the follow up story on Fox just because … well it seemed appropriate.

It’s kind like good news, bad news for the Veep. Obama brings him into the office (again) and says, “Hey Joe, the good news is … we found a cure for baldness … no more plugs. Yea! Oh, the bad news is … you’re fired.”

Update: TOTUS (see our newswire) has responded to the Biden gaffe, denying any involvement whatsoever …

I’m sure some of you have seen the footage of Joe Biden’s speech today, where after the wind has knocked a Teleprompter screen over, he said, “What I am going to tell the president when I tell him his teleprompter is broken. What will he do then?”

First, it wasn’t me.

Oh … Totus also adds some information we did not know before. Revealing. Ha!

By now you have all heard, seen or read the President’s introduction of dignitaries at today’s speech at the National Archives. You know where the President, off teleprompter mind you, could not remember who is Secretary of Defense was … or maybe it was just wishful thinking. Either way here it is again courtesy of Hot Air, which has a pretty funny take on it too.

Well as you know … we run the TOTUS (Teleprompter of the United States) blog in our Newswire section … and well this caught my eye. TOTUS took the blame, even though he was off at the time. What a machine … loyal to the end.

I guess the “William Gates” error is my fault.

But to be fair, sleep mode was preferable to that 35 minute monologue White House speechwriting loaded into me. Good grief, someone please hire an editor.

Make sure you read the whole thing. And you can cheer TOTUS up by leaving him a comment here.

As I read the news today I read these 2 articles in succession and can’t help but laugh.

In this article Harry Reid recounts an interaction where Obama tells him that he has a gift for public speaking. END_OF_DOCUMENT_TOKEN_TO_BE_REPLACED

With all of the serious economic issues of the day, you’ve got to admit that some of the Obama teleprompter stuff has been pretty funny the past couple of weeks. It all started back in September with the team at Iowahawk releasing the video introducing us to the plate of glass.

People have been asking the teleprompter questions about his life in the West Wing and traveling on the road. Rush has has some fun too. 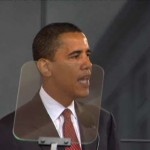 I’m not so certain the Irish prime minister’s introduction to TOTUS (Teleprompter of the United States) went too well, but relationships with electronics often start off on a low note.

On March 18, the teleprompter went public on his own, and surprisingly has yet to be fired. Executive Branch whistle-blowers are not well thought of unless there is a Republican in the White House.

In explaining his reasoning, teleprompter notes…

So why am I going public now, when for the past two years I’ve let others do the talking? Well, this is a thankless job, and I sure don’t want to take the fall for communications missteps. But more important, I expect you’ll be seeing a lot more of me over the next few months and years. Barack and I don’t go anywhere without each other; we even complete each other’s sentences … well, more mine than his, but let’s not split hairs.

The blog – Reflections from the hard drive of the machine that enables the voice of the Leader of the Free World – has been well received.

Update: Malkin has more, including the new seal for TOTUS!

Irish Prime Minister Brian Cowen was just a few paragraphs into an address in Washington when he realised it all sounded a bit too familiar.

It was. He was repeating the speech President Barack Obama had just read from the same teleprompter.

Cowen stopped, turned to the president and said: “That’s your speech.”

A laughing Obama returned to the podium to take over but it seems the script had finally been switched and the US president ended up thanking himself for inviting everyone to the party.

Obama is an accomplished orator but is becoming known in America as the “teleprompt president” over his reliance on the machine when he gives a speech.

Which brings to mind this from Iowahawk? … remember.

BTW … the AP’s headline this morning on the same speech

The President’s bungle not mentioned until the last graph. Ughhh.