Tag Archive for: Sound Off Connecticut

You are here: Home1 / Sound Off Connecticut

Starting at 10AM we will present a special edition of the Jim Vicevich Show. Sandra Raymond, from the Lupus Foundation of America will be joining us, as well as Lisa Sartorius, the President of the Connecticut Lupus Foundation, as we take some time to raise money for Lupus research. Click here to contribute. Look for the “DONATE NOW” on the left hand side of the donate page. Read more about Lupus below the fold. END_OF_DOCUMENT_TOKEN_TO_BE_REPLACED

Tomorrow’s show may be one of the best we have ever had and includes a stellar lineup of some of the finest young minds in commentary journalism today. The lineup with time of appearance below the fold. Make sure you vote, then tune in. END_OF_DOCUMENT_TOKEN_TO_BE_REPLACED

Jim Vicevich will return to the air on Monday, Jan. 25 at 9 a.m. ET. He’ll be on the air for his full three hour show until noon ET. He’s feeling better this week, has his voice back, and is looking forward to getting back to the big show.

END_OF_DOCUMENT_TOKEN_TO_BE_REPLACED

This is quite the experiment. WTIC is offering Jim Vicevich’s radio show – Sound Off Connecticut – via podcast playback, making segments from the show – airing weekdays from 9 a.m. to noon ET – available online. We’ve posted the last two shows here, and have provided an easy way for you to listen to the show any time!

END_OF_DOCUMENT_TOKEN_TO_BE_REPLACED

Just thought I would give you an idea of what computer screen looks like during the show. This is the new MacBook Pro and maybe now you can understand why I needed the 17″ screen. Plus I quadrupled the speed and RAM. Ha. But even with the wide screen it gets a little congested. 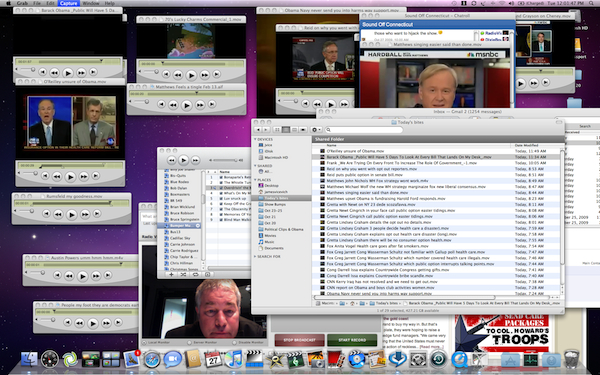 I also will download and re-compress videos from You Tube on the fly and that sometimes gets a bit tense. So I am asking the laptop to do an awful lot and the other Mac just couldn’t handle the pressure. Kind like TOTUS, he just bit the dust.

Here’s what I ask the MBP to do. After recording 10 news shows the night before on my iMAC at home, I compress them to iPhone size and transfer them to the MBP. The next morning I start at 6:30 AM reviewing the video and cutting the bites on the MBP using video editing software. Sound levels are adjusted then.Then it’s line up the sound and off we go.

As you can see we run the sound bites (actually videos so I can describe what’s going on a bit better), the music, the web cam, the chat room, e-mail and Internet research from the MBP, and at times hook in the iPhone too, while Mr Joyce is busy running sound levels, commercials, screening phone calls and compressing and cutting the podcasts.

One last little bit of inside baseball. The Mac, for a few years now, has allowed me to operate a number of different screens on the same laptop, called Expose. Imagine four screens, 1 up and 3 sitting out there in the ether. So at times I will move items onto to other screens which I can then switch to with a key stroke It gets a bit crazy and sometimes a little too complex and often I can be too smart by half. But, it works for me most of the time and never freezes, the older MBP not withstanding. Take that Mr Gates. Thank you Apple.

Tomorrow we will be joined by former Congressman Rob Simmons. He’s a good man and we’ll get his take on the Porkapalooza and the upcoming Senate race. Should be very good. Don’t miss it.

Plus we are joined once again by Jaime from got5minutes.com. Hey .. St. Valentine’s Day is Saturday. Good luck guys.

Want to know what my computer screen looks like in the middle of a show. Well here it is … the video clips plus the music, plus the web cam, plus the chat room, plus internet stories … well u get the idea. Organized chaos!

I think if you click the pick u can see the full size. From this I run the show. The caller screen is seperate. 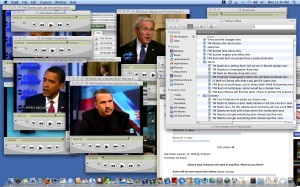