The video speaks for itself. Feigned outrage. Liberal talk show hosts can call conservative women sluts, c&^ts, whores and t$#ts all they want, while contributing millions to the campaigns of Democrats and super PACs at the same time. No fallout, they paid their dues.

END_OF_DOCUMENT_TOKEN_TO_BE_REPLACED

Yeah, yeah, yeah … we’ve heard it all before. GOP candidate for president Newt Gingrich labeled President Obama the “food-stamp president,” igniting the flame of racism among conservatives. Not only do whack-job socialist U.S. representatives get into the act, CNN anchor Martin Bashir stokes the fire himself by highlighting this crap and agreeing with her.

Hat tip to Sister Toldjah, who points us to the transcript over at Fox Nation. Do I even need to tell you the “Lee” in this transcript is Rep. Sheila Jackson Lee (D-Texas)? My emphasis is in bold, and note how Bashir drives the conversation highlighting Lee’s quote. (Scroll down for video.)

BASHIR: Let me play something that you said about the current GOP debate on the floor of the house on Wednesday. Just listen. I think what you said and what I was hoping to run is we find candidates like Newt Gingrich who simply want to throw fuel and matches on fire to develop sort of an explosiveness in this country that is unnecessary. To suggest that president Obama is the food stamp president has underlying suggestions. What did you mean by underlying suggestions?

BASHIR: Did you mean racist?

LEE: Let me say that the code words, as far as I’m concerned words that generate and signify race. Comments made by someone other than the president when he was a candidate caused him to make a significant speech on race to say race is a factor in the United States, but I work and will represent all people. Here we have Newt Gingrich, taking the opposite road, if you will. It’s I will use race to divide. I will call the president the food stamp president not knowing that food stamps are utilized by our soldiers, utilized by Kau Kaig caucasians more than African- Americans. Telling the us a janitor who makes $37,000 would be in a better position to give his job up so that the children of the poor in New York, I think he used the example, the school district Latino and African-American can pick up a broom and work. We know those children should have an opportunity to be an astronaut, scientist. we’re not against work. these children want work. They are fighting for summer jobs. That’s a code word to, if you will, portray poor children and poor school districts that they have seen no one work legitimately. That they don’t have a work ethic and these janitors are overpaid unionized workers who don’t have family and not making $37,000 a year. I think Mr. Newt Gingrich should be ashamed of himself and we should not want to win at any cost. Let’s bring the country together. Let’s not destroy Mr. Obama. Let’s talk about helping the American people.

Of course, when Democrats put Obama into the driver’s seat in 2008, there were plenty of liberals pointing out the Great Recession and the economic slide during the last couple of years of President Bush’s (43) administration … a vote for McCain would be a continuation of that slide. I’m willing to bet you could find an article or speech by a Democrat pointing to the increase in food stamp need during the Bush administration.

Of course now that we have a  communist in the White House – and he happens to be black – any mention of the economic downward slide represented by the number of Americans who are now receiving government aid in the form of food stamps is a racist attack on the president and black Americans. What else could it be?

Jackson is a fruitcake. Let’s make her head explode with the following chart from Associated Press. Note half of food stamp recipients are white. 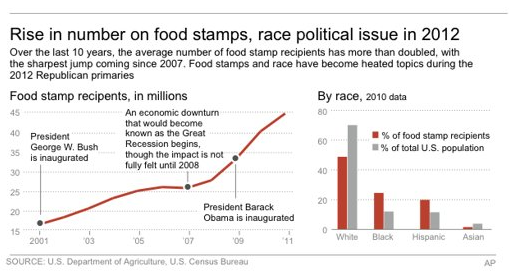 I’m sick of this. There is just nothing more to say other than “this woman is pathetic.” Rep. Sheila Jackson Lee (D-Texas) figures there is no reason – other than race – for Republicans to treat the president “so disrespectfully.” I guess she forgets how Democrats and lefties treated President George W. Bush.

END_OF_DOCUMENT_TOKEN_TO_BE_REPLACED

It’s not new. Democrats use human shields to push every piece of big government legislation they propose. It’s just unusual to find someone like a Neil Cavuto to call Democrats on it. Fantastic ands funny … it’s your Cavuto moment of the day. END_OF_DOCUMENT_TOKEN_TO_BE_REPLACED

Via HotAir … and just too good not to repost. AP, has a hard time trying to follow the Texas Democrat’s logic, as he should, but I’ll give him an “A” for trying. Congresswoman Lee on the House floor yesterday trying to make the case that repealing Obamacare violates the 5th, and 14th amendments. Judo! END_OF_DOCUMENT_TOKEN_TO_BE_REPLACED