You are here: Home / Planned Parenthood

Maybe there is something useful to be learned from the recent backlash against the Susan G. Komen for the Cure foundation’s (hereafter, Komen) momentary withdrawal of support for Planned Parenthood (PP).

Within 24 hours of the announcement Planned Parenthood had raised more $400,000 online, mostly from small donors, according to Tait Sye, a spokesman for the organization.

Additionally, the Fikes Foundation gave Planned Parenthood a $250,000 grant toward starting the Emergency Breast Health Fund, Sye said, in the aftermath of the Komen decision.

And on Thursday afternoon, New York City Mayor Michael Bloomberg announced that he would match up to $250,000 donations from his personal wealth.”

The organization had raised more than $400,000 from more than 6,000 online donors as of Wednesday afternoon, compared with the 100 to 200 donations it receives on an average day, said Tait Sye, a spokesman for the Planned Parenthood Federation of America. He said donations were still coming in.

The group also launched a Breast Health Emergency Fund to ensure funding to affiliates that will lose their Komen grants. That fund received a $250,000 gift from the family foundation of Dallas philanthropist Lee Fikes and his wife, Amy.

The last paragraph sums it up nicely: there is plenty of financial support for Planned Parenthood out there, and this proves it.

So why do they need government money?  According to most sources, PP receives about $75 million from the government every year.  Wouldn’t the objections to its mission mostly disappear if the public is not forced to fund it?  Clearly, lots of “fat cats” and regular people with open wallets support PP in an “emergency”, so why not let them do it all the time?  Come to think of it, with the possible imposition of Øbamacare in 2013, will we need Planned Parenthood?  Recent events have shown that family planning in the form of contraception will be covered if Øbama has his way, as will mammograms (maybe not every year though), HIV screening etc.   Between mandated coverage provided by insurers, and the “universal” coverage we will be paying for with Øbamacare, won’t PP simply become redundant?

An organization as popular as Planned Parenthood should be allowed to prove that popularity by removing the crutch of government support.  The Komen controversy has convinced me that they can do it.

This issue was first brought to my attention last night by a friend. He wanted to know how Planned Parrenthood could sue. After he explained the facts, I told him I had not idea. Today, I learned the answer.

Back to the beginning… END_OF_DOCUMENT_TOKEN_TO_BE_REPLACED

END_OF_DOCUMENT_TOKEN_TO_BE_REPLACED

Consider this a follow up to yesterday’s latest Blumenthal strategy post. As we told you, the Republicans have filed a complaint filed with the FEC. Not sure this is going anywhere, but it should. END_OF_DOCUMENT_TOKEN_TO_BE_REPLACED

The Politico is reporting that Richard Blumenthal is coordinating with Planned Parenthood on what can only be called the sleaziest October surprise in Connecticut political campaign history. Dig up photos on women in the WWE … the sleezier the better … and put em in an add to hammer Linda? Nice. END_OF_DOCUMENT_TOKEN_TO_BE_REPLACED

This is why we need this ultrasound so badly here in Connecticut. Please click here to contribute. Please. Via Gateway.

Planned Parenthood has been a part of Abby Johnson’s life for the past eight years; that is until last month, when Abby resigned. Johnson said she realized she wanted to leave, after watching an ultrasound of an abortion procedure.

“I just thought I can’t do this anymore, and it was just like a flash that hit me and I thought that’s it,” said Jonhson.

She handed in her resignation October 6. Johnson worked as the Bryan Planned Parenthood Director for two years.

According to Johnson, the non-profit was struggling under the weight of a tough economy, and changing it’s business model from one that pushed prevention, to one that focused on abortion. 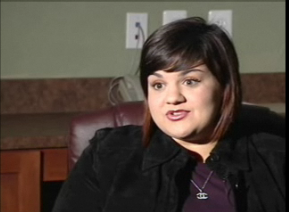