You are here: Home / Nancy Pelosi

I wonder if she means she’s finally going to tell the truth on pre-exisitng conditions, or the true cost of the bill here, and here, or the funding of abortions, or … oh never mind. It’s Amway time … Democrat style.

You gotta love her “cashews”.

As someone who has been following the health care bills, I read Steve’s recent post with interest.  All along in this process President Obama has pledged to the American people that if they wanted to keep their current health insurance they could, as nothing in any of the proposed bills would prohibit that, or make it difficult.

Last Friday, however, the President said,

…stray cats and dogs…got in there… And I think that some of the provisions that got snuck in might have violated that pledge.

Let’s examine that statement.  The first incarnation of Obamacare was what we refer to as the Kennedy/Dodd bill. At page 103 we are told that whether you like your plan or not, unless you have a ‘qualified plan” you will pay a tax.

Then came the Pelosi bill… your insurance is “grandfathered in (i.e. no tax) as long as your insurer makes absolutely no changes in coverage and doesn’t accept one more insured. If that happens, you will pay a tax. (see page 91).

And finally we got the Reid bill. At pages 97 and 100, we were told that there was no need to leave your present coverage, but, unless it was a “qualified” plan, you would have to pay a tax.

Bottom line in all bills, the government made it virtually impossible to keep the insurance you had, whether you liked it or not, unless you were willing to pay a tax, or increased premiums to obtain a “qualified” plan.

What part of all of these proposed bills did the president either fail to read, or fail to comprehend?

Senior administration leaders in both the White House and Democrat party are encouraging Rep. Bart Stupak (D-Mich.) to keep his opinions on current abortion language in the Senate’s health care bill to himself until they can explain the legislation’s language to him. He says “no thanks” and by the way, stop trying to bribe me

END_OF_DOCUMENT_TOKEN_TO_BE_REPLACED

I have written many posts about the fact that Obamacare will do nothing to lower health spending in this country as Obama claims it will.  But, I have received several comments from readers saying that I’ve only used studies from insurance companies in support of my posts. So, let’s use a government study.

END_OF_DOCUMENT_TOKEN_TO_BE_REPLACED

Although this might be a bit late, I thought it may still be a good idea to present the following “public service announcement” to the American Medical Association.  I do this because their endorsement of the Pelosi version of Obamacare was probably done in haste without a full opportunity to read the bill.  Rather than repeat that mistake with the as yet to be released Reid version of Obamacare, perhaps some doctor…anywhere will read what follows. END_OF_DOCUMENT_TOKEN_TO_BE_REPLACED 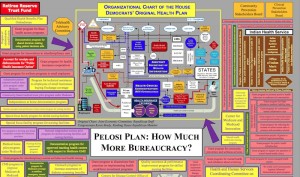 For some unfathomable reason Congress seems convinced that it can suspend the laws of human nature by simply passing a bill. The current incarnation of Obamacare pending in the House is but another example of this folly. END_OF_DOCUMENT_TOKEN_TO_BE_REPLACED

UPDATE: Make sure you read the details but the latest costing of the Pelosi bill is now out. How’s $3 trillion grab ya. Guess our Congresspeople are going to have to update their web sites. Ha! Ed Morrissey has his take on the number but I think it’s perfectly valid. The cost is the cost, not what it costs after you’ve raised taxes. But the bill is so much more than dollar cost. END_OF_DOCUMENT_TOKEN_TO_BE_REPLACED

The House is taking up the Pelosicare bill today and Republicans and Blue Dog Democrats need your help if we are going to stop this piece of crap that will do a wide vareity of bad things and very little good. If you need a refresher course … here’s the link to the SOS posts on the 2000 page abomination. Unlike Congress, she has read most of the bills, including Pelosi’s piece of crap.

I am not going to reinvent the wheel. Michelle Malkin is live blogging the event including this:

House Republicans will hold a second Operation House Call protest event today at 1pm Eastern. If you are in D.C., stand with them.

Please make the effort to make one call … Murphy and Courtney in particular need to know it won’t take much to take back their seats, which were Republican seats.

Plus Jim Hoft, our good friend at Gateway, has a list of other Blue Dogs who could use a nudge here.

Need a little more motivation. Excuse me Mr President. could you talk to the RVO readers for a moment.

I wrote a post last week entitled “Hoyer on Constitutional Law” which dealt with the constitutionality of the power of Congress to mandate that all Americans purchase health insurance.  Rep. Steny Hoyer (D. Md.), and Sen. Patrick Leahy (D.Vt.) have opined that the power to mandate the purchase of insurance comes from that portion of Article I, Section 8 of the Constitution where Congress is granted power to “lay and collect taxes…to…provide…for the general welfare…”.   I strongly disagree with Rep. Hoyer’s and Sen. Leahy’s opinion, but, now, there is a new twist.

Congress derives the authority to mandate that people purchase health insurance from its constitutional power to regulate interstate commerce.

Article I, Section 8 of the Constitution does indeed give Congress the power to “regulate commerce … among the several states”, but using that section to support a mandate that all Americans purchase insurance is equally erroneous.

Here’s an example that I’ve used before to demonstrate how the interstate commerce clause of the Constitution will not, under any circumstances, support a mandate to purchase insurance.