You are here: Home / Martha Coakley

Priceless. I was not going to post again until after the result are in, but this video courtesy Real Clear Politics is awesome. This is what the Democrat party is all about now. Out of state union thugs telling people to “get the f%$# outta here.”

END_OF_DOCUMENT_TOKEN_TO_BE_REPLACED

You would think absentee ballots would be one of those documents strictly controlled, not something a community activist would have stacks of. Except of course…

END_OF_DOCUMENT_TOKEN_TO_BE_REPLACED

Forget what you hear from the national press about the weather. This is New England and Bay Staters are excited. They (national media) don’t know the region and so they look for stuff to say. Well my buddy Jeff Jacoby does. END_OF_DOCUMENT_TOKEN_TO_BE_REPLACED

Jeff Jacoby, as you know, is a very good friend of the show and a great columnist for the Globe. So if you want to know the reason behind Brown’s amazing rise in the Bay State, you need to go to the man, and he is the man.

Part of the answer, of course, is that Brown has proved an engaging and indefatigable candidate, while Coakley’s campaign has been plagued with gaffes and missteps. Her claim in last week’s televised debate that the terrorists in Afghanistan are “not there anymore’’ suggested a dangerous naiveté on national security, while her huffy response when asked why she has been such a passive campaigner – “As opposed to standing outside Fenway Park? In the cold? Shaking hands?’’ – came across as sneering and elitist.

Take a moment to read the whole column. It’s quick and to the point, and it does not bode well for Democrats who support this health care crap anywhere. Please Lord, let the Democrats continue to sleep walk through 2010.

What a great roundup and one that will cheer you up. Just thought I would bring it to your attention, but here’s a sample. 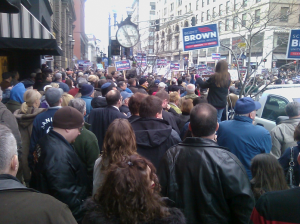 Whatever you do, don’t get carried away here. A lot of stories about supporters and crowds are sometimes related in the excitement of the moment. Read everything with a “grain of salt”. I know as a former reporter how easy it is to get carried away. You be the judge. OK?

Still, I am impressed. This should be good and I intend to live blog tomorrow night. Well it’s my intention. All depends on Doc orders. Ha! But true. I will not screw up my health this time, for anyone or any cause.

Ben Smith over at Politico is reporting that President Obama will visit the Bay State prior to Tuesday’s special election for US Senate. With one poll indicating Massachusetts Attorney General Martha Coalkey is down by four points, they need to call in The One.

END_OF_DOCUMENT_TOKEN_TO_BE_REPLACED

This kind of crap is why the political elite has terrible favorably ratings. It’s not standing up for your principles, rather purely a political game. If Coakley and Obama are on the same political page, Obama should step out and support her, but Rham Emanual is measuring the polls to ensure action does not hurt Obama.

END_OF_DOCUMENT_TOKEN_TO_BE_REPLACED

Speculation everywhere concerning why health care insurance and pharmaceutical companies are tossing money at Massachusetts Attorney General Martha Coakley in support of her bid for Senate. When you’re a big company, you’ve got to play both sides.