You are here: Home1 / maine

Unless you live in Maine, or read today’s Boston Globe, what follows may be unfamiliar to you.  It was to me. END_OF_DOCUMENT_TOKEN_TO_BE_REPLACED

We posted yesterday about the state of Maine’s decision to cut back their Medicaid eligibility rules to the eligibility mandated by the federal government.  Maine is considering this cut back for two reasons.  END_OF_DOCUMENT_TOKEN_TO_BE_REPLACED

In 1993 Maine enacted health insurance regulations that, among other things, told insurance companies that they pretty much had to charge the same premiums to all who applied.  This concept is called “community rating”, and it is an essential piece of Obamacare.  END_OF_DOCUMENT_TOKEN_TO_BE_REPLACED

On Wednesday, the Senate overcame a filibuster for a bill that would send $26 billion to the states to “prevent teacher layoffs and help states with Medicaid costs”.  The bill will now pass the Senate this week.  As a result, Speaker of the House, Nancy Pelosi (D. Ca.) has quickly called all House members back from their “summer vacation” to a special House session set for next Tuesday so that the House can pass the same bill. END_OF_DOCUMENT_TOKEN_TO_BE_REPLACED

I think it is difficult for some to visualize what would happen if Obama Care, or Universal Health Care or what ever it is that you choose to call it gets passed by the Senate and the House.

But on the cover of Healthcare Ledger could be the best visual aide in
understanding what  universal health care could be like for us common folk. 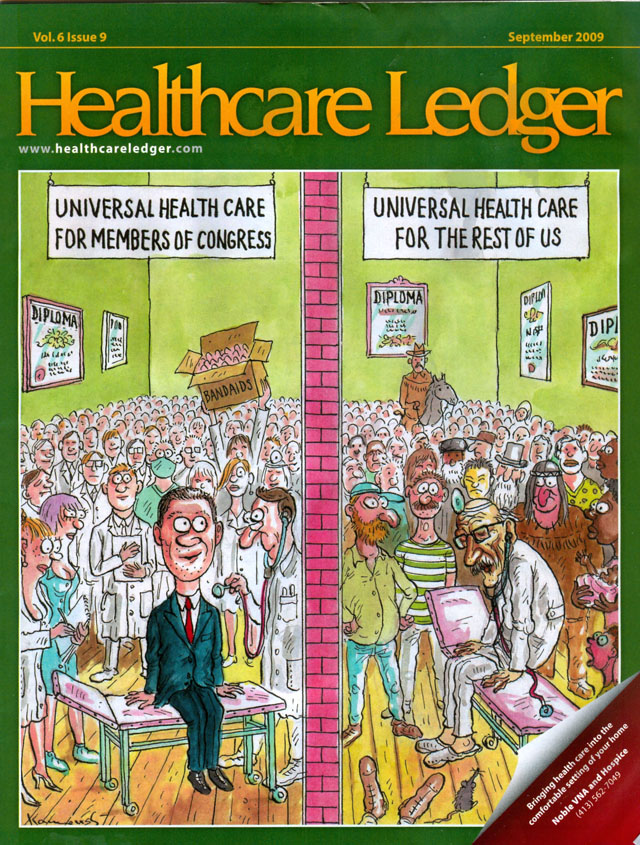 Someone, far smarter than I, once defined insanity as repeating the same behavior over and over again, and expecting a different result.  Were that same person looking at the current proposals for health care reform, I suppose that person would conclude that both Congress and the President are insane.

All of the health care proposals floating around Washington are simply carbon copies of health care policies established elsewhere.  Given that, one would think that Congress would have learned by now (perhaps on one of their many “fact finding” trips at taxpayer expense) that none of those policies, not a one, has ever lived up to the grandiose promises.  In fact, they have failed miserably.

We all have heard of the horror stories of rationed care and backbreaking taxes in the United Kingdom, or the endless waits for specialists and surgery in Canada that have driven many Canadians across the border to receive health care in the United States.

But, Congress doesn’t even have to look beyond our borders to see what will happen.  Obamacare exists in Hawaii, Tennessee, Massachusetts, and Maine, and it hasn’t worked in any state.  Incredibly, however, Congress has chosen not only to overlook what has happened in those states, but also to draft legislation that is virtually identical to those failed models.

The same tragedy has also played out in Maine.  It has seen a 74% increase in insurance premiums in 5 years, and today, the number of uninsureds in Maine is only slightly lower than it was when the program started.  At the same time Maine spent over $2 million to accomplish this feat.

Now that I think about it, the above definition of insanity seems accurate.  Why would anyone in their right mind suggest a program that the overwhelming weight of the evidence graphically demonstrates doesn’t drive down the cost of health care, doesn’t reduce the cost of insurance, and doesn’t materially affect the number of uninsureds, while at the same time spending $1 trillion to do so?

I’m beginning to wonder whether anyone “inside the Beltway” is capable of rational thought.

President Obama is set to speak before Congress and the nation Wednesday evening about his plans for universal health care in this country.   So far, three promises seem to stand out among the rest as the linchpins upon which his plan is based.  Should he mention any of them in his national speech, here is an analysis of each based upon what has already been tried.

I will use the state of Maine for this discussion, although I could just as easily use Massachusetts or Tennessee.  All three have tried Obamacare, and, all three attempts have failed abysmally.

Promise # 1: our plan will provide insurance for all.

That is exactly what Maine thought when it passed its version of Obamacare in 2003.  DirigoChoice, Maine’s “public option” was supposed to provide insurance for Maines’s then 128,000 uninsureds.  The state would subsidize the cost, “at no cost to the taxpayer” (more about this in Promise # 3), and, voila, the uninsured would be insured.  What happened is entirely different.  Most of those who joined DirigoChoice were already insured, and they dropped their private plan to go with the cheaper subsidized public plan.  Most of those people were the people who were the sickest, and, thus, those who required the most medical care.  Now, some 5 years into the program,

the number of uninsured in the state today is only slightly lower that in 2004 when the program began.

Why?  People who need a great deal of medical care cost money.  To keep up with that cost Maine had to raise premiums for the public option to the point where even with subsidies, the uninsured couldn’t afford it.

Promise #2:  our plan will make sure that those with pre-existing conditions will be guaranteed insurance, and the “public option” will provide competition, thus, reducing premiums for all.

That didn’t work either.  Maine requires that anyone who applies for private insurance must be accepted regardless of their medical condition (i.e. guaranteed issue), and, the premiums charged to them must be the same as the premiums charged to healthy applicants (i.e. community rating).  This concept is a key provision of both the House and Senate version of Obamacare.  So, why didn’t it work?  Insuring people who need costly medical care, believe it or not, costs money.  To cover those costs, premiums had to be raised for all…74% in 5 years.  Maine is now at the point where,

a healthy male in Maine who is 30 and single pays a monthly premium of $762 in the individual market; next door in New Hampshire he pays $222 a month. The Granite State doesn’t have community rating and guaranteed issue. [emphasis supplied]

Promise #3: and, we will pay for this by eliminating waste, etc., at no cost to the taxpayer.

Well, that didn’t work either.

The system that was supposed to save money has cost taxpayers $155 million and is still rising.

To solve this financial shortfall, Maine has had to impose new taxes.

Should you hear any of the above “promises” repeated Wednesday night, you will know that they are not promises, only “urban legends”.  You simply can’t insure all without raising premiums for all, and raising taxes for all.   No matter how sincere the President sounds, these promises are doomed to fail.

One final note…curiously, one of the Republicans that the Democrats are wooing to support Obamacare is Senator Olympia Snowe from, you guessed it, Maine.  One wonders if she has spent any time in her home state for the past 5 years.

So, why would you think this is a bad idea? Heck, when your talking about the people who are actually buying these luxury items, they certainly wouldn’t mind paying a bit more for these items would they? They are rich ya know, they can afford it. Tell that to the employees that were actually making these boats in Florida or selling these cars in New York. END_OF_DOCUMENT_TOKEN_TO_BE_REPLACED