You are here: Home1 / katrina 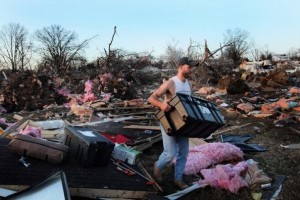 Just a quick note to guide you over to American Thinker today. Lance Fairchok writes Big Lies in the Big Easy: The Ghosts of Hurricane Katrina. It’s a good read and a reminder as to how Democrats – when backed against a wall – immediately target the blame elsewhere. END_OF_DOCUMENT_TOKEN_TO_BE_REPLACED

Third post in a matter of hours. Sorry about this, but… what they heck is going on in New Orleans?

NEW ORLEANS, Louisiana (CNN) — New Orleans has yet to rebuild a single fire station more than two years after Katrina destroyed or damaged 22 of the city’s 33 firehouses. Appalled by the city’s lack of action, an actor is leading the way in reconstruction of the fire stations.

Without city help, firefighters have resorted to repairing their stations along with volunteer carpenters. “I gave up on ever hoping that politicians in this country — local, state or federal — would step in to help these guys,” actor Dennis Leary told CNN.

Hundreds of billions of dollars have been handed out in this portion of the country and they can’t even get the fire stations fixed up?

Blaming Bush and FEMA is now OFF THE TABLE. Don’t even go there. Dennis Leary is making a valiant effort in this case, but he should be going after the fools who are running that dump of a city. The federal government handed the city billions and told them that the local people need to step up, come up with a solid plan and implement it. They failed, and now Leary expects Bush or FEMA to come in and fix it?

Not acceptable and a perfect example of what can happen in a liberal city, run by Democrats. I thought New Orleans was a liberal paradise?

I first noticed this during his Katrina coverage, there have been plenty of stories about how the news media – including Shep when he was in NOLA – was out of control when it came to reporting rumors as facts.

He was the ultimate drama queen through the entire event, and as the weeks passed, more and more of the “big stories” just disappeared from the MSM.

I just found a March 2006 article written by a collection of editors from Popular Mechanics entitled Debunking the Myths of Hurricane Katrina. It is a must read for everyone and if you’ve already read it, go through it again. I wonder if Shep went through this article and took the time to look back at his coverage and do a self-evaluation?

Probably not, he’s part of the Dive by Media. That’s a term that Rush Limbaugh coined during the past couple of years. It’s simply defined as when the media swoops in to cover a story, goes wall-to-wall with it for hours or days, relays every rumor they hear and interviews anyone they can find that will speculate about the story. Then, they split, never to come back since they have to go find another hot story.

Last week, Shep used the term “bloodbath” when referring to a 167 point drop in the Dow Jones Industrial Average. What? Is he nuts? Who writes this stuff for him?

To put this in perspective, that’s a 1.2 percent drop Shep. Come on now. If that’s a bloodbath, what would he call the 6.4 percent gain over the 11 trading days after the Thanksgiving break?

I propose a ban on reporting the point changes in the various stock benchmarks like the DJIA, NASDAQ, S&P 500 and the new Fox 50. Let’s report percentage changes instead, but I guess a 100 point drop sounds more dramatic than a point seven (.7) percent drop.

Related Articles on the Net: