Although we do not have the text of the forthcoming jobs bill from Congress, Reuters says they have obtained a copy of the bill.

END_OF_DOCUMENT_TOKEN_TO_BE_REPLACED

Thought you all might enjoy this little video. It’s a montage of yesterday’s talk shows with David Axelrod, Robert Gibbs, and Valerie Jarrett all giving different answers to the stimulus jobs question. END_OF_DOCUMENT_TOKEN_TO_BE_REPLACED

You lefties crack me up. And you make fun of us for talking about the Reagan era. You guys can’t get the “New Deal” out of your system. You get it that the natives are restless because of high unemployment and you think you can calm those “Bible thumping, gun toting, PBR swilling, sister kissing, gapped tooth righties” by putting them to work fixing you lunch or something.

The only similarity between 1933 and 2010 is there’s a Democrat at the helm of double digit unemployment, and, as the White House said yesterday, we can expect that kind of unemployment for years to come. The reasons are similar too. Government is sucking up all the capital and refusing to release the free market from overbearing mandates, all in the name of … jobs?

This morning Washington Post columnist called on the President to start another WPA. Spoken like a man who hasn’t dug a ditch in a while.

If we expect U.S. manufacturers to rehire all — or even most — of their laid-off workers, we’ll be badly disappointed.

That’s why the nation needs a public jobs program in addition to a policy of helping small businesses grow again. The infrastructure investments Obama proposed will go part of the way toward meeting that goal, but specific programs of public employment, such as those created by Franklin Roosevelt and that notorious radical Richard Nixon (who signed into law the Comprehensive Employment and Training Act, or CETA) are needed as well.

Remember too, the work force of 1933 is much different than today. I hardly think a laid off bank teller, insurance clerk, or investment advisor will be well suited for WPA work, but that’s just me.

Then there’s Chris Matthews who noticed we are not enough like Europe. (OK, we are when it comes to unemployment now, but I digress).They have big fast trains that carry his children to and fro across the landscape while they “study abroad”. Let’s put you laid off insurance folk to work building, trains?

So you see, instead of let them eat cake, it’s let them lay ties.

No friggin’ kidding? You mean to tell me the private sector is the engine of the United States economy? I swear less than a year ago politicians in-the-know were telling us we – the people – had no clue how to spend our own money and improve the economy on our own.

END_OF_DOCUMENT_TOKEN_TO_BE_REPLACED

On This Week Sunday  Nobel Prize winning economist Paul Krugman, one of the Sunday morning “wizards of smart” (thank you Rush Limbaugh) thinks he has a great idea to stimulate the economy: another WPA program. More infuriating than his cavalier attitude toward working Americans, or rather, out of work engineers, accountants, actuaries, manufacturers, etc, is his remarkable admission, right at the top that not only didn’t the first stimulus do the trick, but the second one he has in mind could be much more stimulating at a much lower price.

So smart. It kicks off with Matthew Dowd explaining why the stimulus didn’t work. No argument here.

I thought this was a very interesting time lapse map of unemployment since January 2007.

END_OF_DOCUMENT_TOKEN_TO_BE_REPLACED

Honestly I am not kidding … 20 jobs. Just to review:

But please, don’t  take my word for it … straight from Recovery.gov . Click to enlarge. 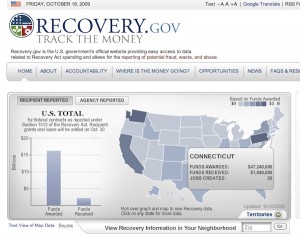 Just imagine if Connecticut’s senior Senator were a Republican. Damn, we would probably owe this crowd jobs. Can’t ya feel the stimulus?

Thanks to Jim Geraghty at National Review. He did the numbers for Virginia and New jersey where they will likely make a difference this year.

OK … I know its $787 billion  … but its debt and any good home economist says the true cost includes the interest … but I digress.

Remember when Joe Biden said this?

Well, apparently in this administration it is a four letter word they try to avoid. From the Hill … but then don’t say we didn’t tell you so in February.

The data posted Thursday was the result of the government’s initial attempt at counting actual stimulus jobs. Obama administration officials stressed that data was partial — it represented just $16 billion out of the $339 billion awarded — but they said it exceeded their projections.

So the numbers are small because it just counted a portion of the dough that has already been distributed. Fair enough. If I am calculating correctly, extrapolate and you get 600,000 jobs for $339 billion … such a deal.

When the deal is done next year that would indeed come to more than a million jobs over a two year period. Plus remember most of this stimulus money went to maintaining state or city employment. If the money doesn’t continue to flow from taxpayers … those jobs disappear. Period.

Finally the Republicans remind us of this:

But the preliminary raw data stoked more stimulus criticism from GOP lawmakers. Republicans pointed to the reports and the current 9.8 percent jobless rate, the highest in 26 years, to charge that the stimulus had failed.

Aides to Senate Minority Leader Mitch McConnell (R-Ky.) noted that nearly 3.4 million jobs have been lost since the stimulus was passed in February. They also dug up quotes by President Obama, Biden and their economists in which they predicted that the stimulus would save or create 3 to 4 million jobs.

Perhaps time to listen one more time to the Vice President:

Exit question: Does he even hear himself?

Addendum: Don’t know why I am adding this but … I do have a certain amount of respect for the guy. His son has just returned from Iraq and I agree with Bates, Brooks, McCarthy and Peters … Biden urging a return to counter terrorism in Afghanistan is the right plan. But in this case … he’s just another politician putting lipstick on a pig.

UPDATE: Michelle Malkin has some analysis from Heritage. As she says, error palooza.

OMB Watch said its review yielded “really weird job numbers,” including many discrepancies within the reports themselves. For instance, Jennings said OMB Watch found that many companies said in a narrative portion of their reports that it was able to retain several employees because of stimulus funds, but the “jobs created” column read “zero.”

The Recovery Board aggregates its jobs data from the “jobs created” column to display the total number of jobs saved or created. Jennings speculated that recipients might have been confused about the scope of the term “created.”

“I would not stake any sort of claims on those job numbers,” said Jennings. “We don’t know what’s going on there.”

It’s a series of three video clips. The first is Moody’s chief economist Mark Zandi. He agrees we will be facing double digit unemployment for months if not years. But he says the stimulus is working. Otherwise it would be worse. Really?

We’ve heard this line before … from these same economists. Remember? We were told if we didn’t pass the stimulus unemployment would exceed 8%. The stimulus would prevent that. Remember? maybe this chart will refresh your memory. 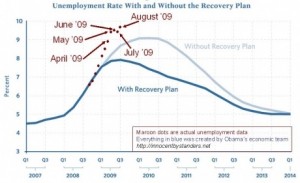 Well that was pretty much all Steve Wynn could stand. He employs 20,000. Never laid anyone off he says … get out of the way, he says. Let the private sector create jobs.

Oh but no … Wynn is not finished. Not until he takes on Michigan’s Governor Granholm. The woman who presides over the worst state economy in the country (OK, sorry California), where unemployment is at Depression levels … 15.2%.

Blog Prof has the whole rundown … on the jobs picture.

Oh and a big hat tip to Gateway for pointing out the sorry state of Michigan for me. He has a pretty nice video over there of Detroiters clamoring for “Obama money”