You are here: Home1 / Detroit

Why not? Certainly if the federal government can come in and write unique and precedent-setting bankruptcy rules for General Motors, they can do the same thing for Detroit. For those of you who think Detroit’s problems belong to the city and Michigan, you’re wrong. You’re going to end up paying for it.

END_OF_DOCUMENT_TOKEN_TO_BE_REPLACED

Detroit is broke, and as we learned yesterday afternoon, the broken city has filed Chapter 9 bankruptcy. If accepted by the courts, it will allow city leaders to restructure their debt. But who gets to do the restructuring?

END_OF_DOCUMENT_TOKEN_TO_BE_REPLACED

I did not connect the dots, but Steve Gilbert over at Sweetness & Light and many others did. JoAnn Watson, the city council member in Detroit who demanded the city get quid pro quo payments from President Obama since the city overwhelmingly voted for the president, paid an incorrect and extremely low property tax bill for years.

END_OF_DOCUMENT_TOKEN_TO_BE_REPLACED

As the city of Detroit contemplates bankruptcy, some leaders in the city don’t think they should have to go bankrupt and renegotiate the current contracts and unfunded future entitlements the city has. They want some of Obama’s stash.

END_OF_DOCUMENT_TOKEN_TO_BE_REPLACED

Federal officials who are fond of feeding children in need have determined the self esteem of kids has suffered because they get a free lunch at school. So instead of promoting programs to lift the spirits of the kids -and improve the economic situation for the families – they’re going to give free lunches to all the kids.

END_OF_DOCUMENT_TOKEN_TO_BE_REPLACED

We’ve read about the ridiculous zero tolerance enforcement in public schools for years. In Detroit, the school board banned Sikh students from wearing a religious dagger called a kirpan, but have recently reversed the ban. I think the school made the right decision for the wrong reason. END_OF_DOCUMENT_TOKEN_TO_BE_REPLACED

New video from Steven Crowder at PJTV. Crowder visits some of the worst sections of Detroit in this video and the basic question – as always – is how did Democrats who have been in almost total control of for almost 50 years bring the city to its knees.

END_OF_DOCUMENT_TOKEN_TO_BE_REPLACED

Senator Mitch McConnell asks the relevant question here. Don’t blame the failed terror strike on that NW Airlines plane solely on the folks in Nigeria, Umar Farouk Abdulmutallab’s origination point and Amsterdam, his connecting airport, who let this guy into the US? END_OF_DOCUMENT_TOKEN_TO_BE_REPLACED

I’m not even sure what to think of this. Detroit city councilwoman JoAnn Watson owns a nice looking home in Detroit and paid $68 in property taxes in 2008. Sixty-eight dollars. It looks like the city of Detroit figured that the property was an empty lot for the past decade.

From the Detroit Free Press…

Watson said she was unaware of the discrepancy until the Free Press contacted her. She said the change came before she was elected to City Council — and without her involvement.

“I pay the taxes. All I know is I had a big drop when my house got hit hard by a tornado,” she said. “We had great damage.”

Watson said she could not recall the specific date the tornado hit, saying it might have been 2002, or perhaps 1993.

Look, it’s certainly probable that the assessors office screwed up 10 years ago, but if a city council member could not figure out that something was wrong with her tax bill, she certainly does not deserve to be any sort of leader in local government.

Photos courtesy of freep.com. Click on them to enlarge. 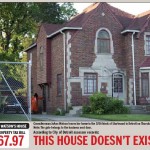 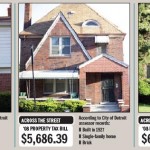