You are here: Home1 / David Paterson

I was just reading this post over at WINS 1010 concerning Gov. David Paterson’s (D-N.Y.) problem with the unions after his plans might result in – God forbid – state employee layoffs. I noted the state employs 200,000 workers. Guess how many Ford Motor Company has?

END_OF_DOCUMENT_TOKEN_TO_BE_REPLACED

Gov. David Paterson (D-N.Y.) is not at all on board with Attorney General Eric Holder’s decision to have five Sept. 11 planners brought to New York City for a civilian criminal trial. Supposedly Holder made the decision, and he informed President Obama. Why is Paterson saying the White House warned him this was coming six months ago?

END_OF_DOCUMENT_TOKEN_TO_BE_REPLACED

I am late getting this up but it is oh so instructive. It also shows that while all Democrats may not understand … at least one says he does. I just couldn’t decide whether to make this an economics or political post. Hope I got it right.

From Friday’s morning Joe, NY Governor David Patterson tells Mika, first no soda tax (which he had proposed earlier) and no millionaire’s tax either. “What we’ve found is that they just aren’t millionaires anymore, or they have left the state.”

Has he found religion? Hmmmm. It is disturbing that he says “at this time”, when it comes to raising taxes. Watch the whole;e thing. As I said instructive.

So when Democrats find themselves caught in a budget whirlpool, plunging poll numbers, and a rising tide of fiscal conservatism, they turn to what again? Just askin’, is all.

Today, Anne E. Kornblut over at the Washington Post questioned if a glass ceiling in American politics still existed since Caroline Kennedy was knocked pretty hard as she was being considered as a replacement senator for the state of New York.

Maybe she missed part of her own story, where someone wrote that Kirsten Gillbrand was going to be selected by the state governor to fill the seat. 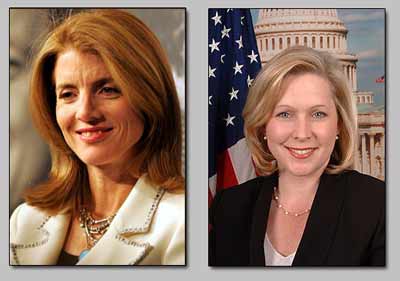 Hot Air reminds us that Gov. David Paterson (Dem, N.Y.) thought it was important to select a female for the position.

Exit question: Would there be an uproar if a male held the Senate seat before, and Paterson stated that he thought it was important to select a male candidate?