You are here: Home1 / bonuses

President Obama and Secretary Tim “TurboTax Screwed Me” Geitner approached the White House microphone today to bitch and moan about how much bank executives are getting paid, and announced a new tax plan to stick it to big-bank. The problem … big-bank will just pass along the tax burden to you.

END_OF_DOCUMENT_TOKEN_TO_BE_REPLACED

First, I am sure this is my last Matthews post for a while. Well I am pretty sure.

But, I … well I just could not stop laughing. Chris Matthews and guests Pat Buchanan and Ron Brownstein kick Wall Street around (deserved) but then demean the entire system. Paraphrasing now but it boils down to … these guys on Wall Street produce nothing … and thus deserve nothing.

Oh, and stick around long enough for the Matthews, Brownstein hypocracy hit … they love the money we make on Wall Street … just not the people who make it happen. Perfect view from the left.

It really shows a fundamental lack of knowledge of the capital markets. I won’t defend the size of the bonuses these guys get but I will defend what they do. They generate the “paper” as Brownstein puts it … that builds the buildings that house the people that work the machines, that make the products that raise the standard of living that capitalism built.

As for explaining why you deserve the money? Matthews reportedly makes $5 million?

The NBC cable network refused to share salary details with the New York Times, save for the most humiliating one: Matthews is still making more or less $5 million per year. In October that would have been 25 percent more than Olbermann made. Now it’s roughly 33 percent

Well now that the federal government has totally freaked out about compensation programs that include bonuses, companies will need to adjust compensation strategies to attract and retain talent. Citigroup will be increasing salaries 50 percent for some positions. I’m not surprised one bit…

END_OF_DOCUMENT_TOKEN_TO_BE_REPLACED

Not only does Rep. Barney Frank (D-Mass.) want to slander corporate executives by dragging them in front of some stupid committee hearing and confiscate their pay retroactively, Frank wants to have control over all compensation of any employee who works for a company that may have received bailout funding.

My question is, will the Treasury secretary be able to retroactively change the union contracts negotiated with car manufactures who have received bailout funds?

My guess is that will be off the table. (More on this soon)

From Byron York at the Washington Examiner, with a hat tip to Michelle.

Beyond AIG: A Bill to let Big Government Set Your Salary
… in a little-noticed move, the House Financial Services Committee, led by chairman Barney Frank, has approved a measure that would, in some key ways, go beyond the most draconian features of the original AIG bill. The new legislation, the “Pay for Performance Act of 2009,” would impose government controls on the pay of all employees — not just top executives — of companies that have received a capital investment from the U.S. government. It would, like the tax measure, be retroactive, changing the terms of compensation agreements already in place. And it would give Treasury Secretary Timothy Geithner extraordinary power to determine the pay of thousands of employees of American companies. …

It applies to all employees of all companies involved, for as long as the government is invested. …

… the bill gives Geithner the authority to decide what pay is “unreasonable” or “excessive.” And it directs the Treasury Department to come up with a method to evaluate “the performance of the individual executive or employee to whom the payment relates.”

Where are we going with all of this Congressman Frank? Just admit it congressman, you just want the government to control everything. When this does not work out – and it will not work out – I guarantee the problem will be the way the private sector does business.

As congress continues to call AIG executives to task in televised hearings, Executive Branch political appointees keep year-end bonuses from Citigroup and that’s perfectly fine since – get this – there is no need to bother them with that trivial stuff since the government “needs the talent we have” and faces “enormous challenges” so they need “all hands on deck.”

Within the last couple of days, the New York Times quietly reported that three political advisers to the White House received year-end bonuses from bailed out Citigroup. From Charlie Savage’s piece in the Times…

Several members of the Obama administration worked for financial companies that received bailout funds, raising the question of whether they should keep any bonus they received.

At least three members of the still-growing team of political appointees, for example, worked at Citigroup and were eligible for year-end bonuses. One of the former Citigroup executives, Michael Froman, the deputy national security adviser for international economic affairs, has decided to give his bonus to charity. The White House declined to provide specific details on what the other two — the deputy Secretary of State, Jacob J. Lew, and David A. Lipton, the White House’s senior director for international economics — will do.

Why are they not stunned and “obviously angry” about the bonuses paid? Any demands to return the cash to the government? Have they been targeted for a 90 percent tax on the money?

“While we don’t require former executives to forgo their bonuses when they come to work here, some made the choice to give their bonus or other compensation up,” Ms. Psaki added. “Executives who come to work for this Administration take a major pay cut to do so because they believe in the efforts of the President to change the system–including his long time commitment to stronger regulation of the financial services industry.”

So, if you go to work for the government, you get a pass since you’re doing The One’s work, but if you agree to a $1 salary and only get paid if you stick around and work your tail off to solve a problem in a division of AIG that is slated to be closed, you’re evil.

On today’s Rush Limbaugh show – which I rarely get to listen to these days – he tuned us into an interview with David Axelrod, President Obama’s top political adviser who had no problem with the bonuses. They really need to keep the talent in the White House, it’s really important and they need to have all hands on deck. Here’s the audio.

I guess AIG’s problem is not all that important.

I’ve been waiting for stories to be released from AIG executives who elected to leave the company during the last week due to attacks from political hacks who never want to let a good crisis go to waste. END_OF_DOCUMENT_TOKEN_TO_BE_REPLACED

I am glad Politico caught this because frankly, I had seen enough of the President for one week. END_OF_DOCUMENT_TOKEN_TO_BE_REPLACED 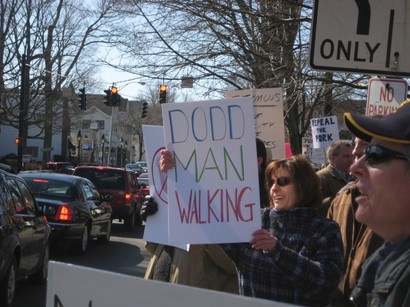 Update 2: Welcome Michelle Malkin readers. As you already know she is invaluable to all of us … especially those of us in talk radio. In face the face of constant assault, she remains strong. While you are here take a look around. We are heavy on video, as we try to carry the conservatarian torch in a very blue New England sea.

As it turned out, the tour consisted of brief, uneventful visits to just two homes — Poling’s and that of James Haas, another AIG employee who had already pledged to forfeit his bonus.

A third bonus recipient’s home, belonging to Jonathan Liebergall in New Canaan, was dropped from the itinerary mid-tour because the bus was running behind schedule. Liebergall, too, has said he will return the bonus.

But the best part was the turnout … by the media. Because you cannot make this stuff up. Let’s see if you can figure out who the media sympathizes with.

From “Nice Deb” … and so typical of the now dying media. And they still cannot figure out why they are going out of business … 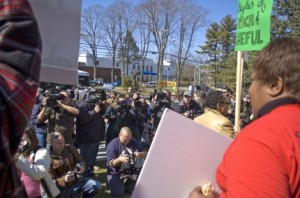 Here’s what the AP reports (Emphasis mine):

A busload of activists representing working- and middle-class families paid visits Saturday to the lavish homes of American International Group executives to protest the tens of millions of dollars in bonuses awarded by the struggling insurance company after it received a massive federal bailout.

About 40 protesters sought to urge AIG executives who received a portion of the $165 million in bonuses to do more to help families.

While the tea parties, (which are popping up all over the country, drawing hundreds and even thousands of people every week), are attracting scarce attention from the media, a motley troupe of 40 ACORN malcontents that go by the name of the Connecticut Working Families Party attracted dozens of reporters from around the world 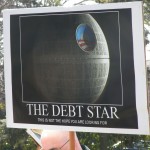 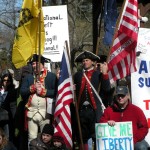 Thanks so much to Linda for pointing this out to me this morning.

Update: Oops … it’s a tie. This from the Hartford Courant this morning, paragraph 4:

“Now that we have had a chance to see your community,” Jackson read before an international throng of about 40 journalists, “we would like to invite you to visit ours.”

Roughly 40 activists boarded the bus in Hartford, joined it in Bridgeport or followed it in other cars, according to organizers.

Update: (Steve) Thanks for the link Michelle!