Tag Archive for: Air Force One

You are here: Home1 / Air Force One

The aircraft flying over the southern tip of Manhattan today seems to have caused quite a kerfuffle. Often referred to as Air Force One, either SAM28000 or SAM29000 – a specialized version of Boeing’s 747-200B – took three leisurely passes over the Statue of Liberty and New York City this morning. 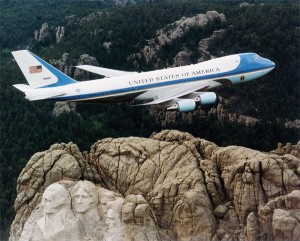 Since the folks who live in the city were not told about the flyover photo op, many were quite concerned; some were freaking out. Looking up, the jet looks like any other big flying object that can cause serious problems. Of course, (most) everyone in government knew about the fly-over, but they were asked not to tell any of the commoners.

It did not help matters that the VC-25A (Boeing 747 in Air Force lingo) was being closely followed by a fighter aircraft.

No, this is not Obama’s fault, just a really stupid move by some mid-level manager somewhere.

So, how many carbon offsets would be required to compensate the earth for all of this pollution?

Exit question: If Congress gets to scream at auto executives for taking private jets to Washington D.C., who should they scream at for this?

Update (Jim): Other than being extraordinarily revealing about how this new administration has forgotten 9-11 and everything it means, Gretta Van Susteren tonight asks the relevant question for an economics person like me. Stephen Moore’s answer is priceless though. True … but priceless.