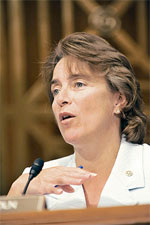 Sen. Blanche Lincoln (D-Ark.) is reminding Arkansas voters she brought back – more or less stole – millions of dollars from other states in federal pork spending. I’ve mentioned this in the past … states are getting into the habit of voting for incumbents as long as they bring back more pork dollars then the other guy. Not good.

Seriously, do you really want to vote for congress-critters based on their success in getting more pork dollars per-capita then the other candidate? If you think that’s “just the way it is” or the “game” that needs to be played, you’re a big part of the problem. This is the disease, and eventually we’re going to have to realize too much power has been moved from the states to Washington, D.C.

Yeah, I know, I sound like a broken record, but you must understand this fact is my passion. Most everyone agrees – including many liberals and progressives – this is a big issue that must be solved. But the problem is considered too hard to fix by many. I can’t tell you how many times I hear “you’re right, but it will never happen.”

We need to try. We also must understand it took decades for politicians in states to incrementally allow power to be taken from them in exchange for a chance to hit one of the many porkulus jackpots … and it may well take a few decades to reverse the trend.

Ignoring Republican complaints about wasteful federal spending, Democratic Sen. Blanche Lincoln is reminding voters – in dollars – of what’s she has done for Arkansas during nearly 16 years in Washington.

Nearly every day, her campaign and Senate offices trumpet money that she’s helped secure for her home state – from $13,811 for the Hope Police Department to buy a new cruiser to a $102 million stimulus-funded grant for the state to pay for broadband Internet.

Defending projects typically derided as pork is a tricky stance for a vulnerable incumbent, but Mrs. Lincoln has turned her re-election fight into an argument for pet projects – calling them the “great equalizer” for small, rural states like Arkansas.

“I’m going to fight hard for my state because, let me tell you, these dollars are going to go somewhere else if we don’t get them,” Mrs. Lincoln told the Associated Press.

It’s a return to the basics for Mrs. Lincoln, who is trailing in most polls. She has faced anger from both the right and the left, with liberal activists trying unsuccessfully earlier this year to throw her out of office in the Democratic primary.

If you’re OK with the feds picking up the tab for cruisers, brick sidewalks, street signs and skateboard parks … why even bother having local or state funding at all? Why not just route all spending through the federal governments and let Congress at as – what Sen. Lincoln refers to as – the great equalizer?

You know what that’s called don’t you? Centralized control of everything? Come on … you know.

I remind you about Article 1, Section 8 and the 10th Amendment to the U.S. Constitution. Is it so hard to understand that the founders were genius? We are the United States of America people!

Powers delegated are strictly defined in the Constitution itself – in Article 1, Section 8.

To borrow Money on the credit of the United States;

To regulate Commerce with foreign Nations, and among the several States, and with the Indian Tribes;

To establish an uniform Rule of Naturalization, and uniform Laws on the subject of Bankruptcies throughout the United States;

To coin Money, regulate the Value thereof, and of foreign Coin, and fix the Standard of Weights and Measures;

To provide for the Punishment of counterfeiting the Securities and current Coin of the United States;

To promote the Progress of Science and useful Arts, by securing for limited Times to Authors and Inventors the exclusive Right to their respective Writings and Discoveries;

To constitute Tribunals inferior to the supreme Court;

To define and punish Piracies and Felonies committed on the high Seas, and Offences against the Law of Nations;

To declare War, grant Letters of Marque and Reprisal, and make Rules concerning Captures on Land and Water;

To raise and support Armies, but no Appropriation of Money to that Use shall be for a longer Term than two Years;

To provide and maintain a Navy;

To make Rules for the Government and Regulation of the land and naval Forces;

To provide for calling forth the Militia to execute the Laws of the Union, suppress Insurrections and repel Invasions;

To provide for organizing, arming, and disciplining, the Militia, and for governing such Part of them as may be employed in the Service of the United States, reserving to the States respectively, the Appointment of the Officers, and the Authority of training the Militia according to the discipline prescribed by Congress;

To exercise exclusive Legislation in all Cases whatsoever, over such District (not exceeding ten Miles square) as may, by Cession of Particular States, and the Acceptance of Congress, become the Seat of the Government of the United States, and to exercise like Authority over all Places purchased by the Consent of the Legislature of the State in which the Same shall be, for the Erection of Forts, Magazines, Arsenals, dock-Yards and other needful Buildings;–And

To make all Laws which shall be necessary and proper for carrying into Execution the foregoing Powers and all other Powers vested by this Constitution in the Government of the United States, or in any Department or Officer thereof.

For some unknown reason, they felt the need to reinforce Article 1, Section 8 in the Bill of Rights (the 10th Amendment).

Symptom of the Disease: Governors begging for cash from the feds
3 replies

Run! Run as fast as you can … from Obama and Pelosi
Scroll to top