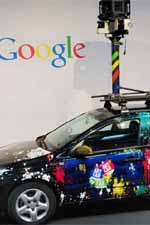 Do you have an issue with Google driving around the world capturing personal information? While many countries are holding Google to a high standard and taking them to court, claiming private information was stolen, Google management raised $1.8 million for Democrats at one dinner … and four days later…

Nothing to see here folks. And do you know what? Maybe their really is nothing to see here. That said, the $30,000 a plate fundraiser – which in no doubt included a plate with about $3 of food – breeds the perception that money in Washington, D.C. flows like water over Niagara Falls and the Washington elites are just that … pompous elites.

Those of us who could not conceive of attending a $30,000-a-head fundraiser are scratching their heads, wondering why anyone would be willing to hob-nob with a few political elites, if for only about 20 minutes. Really now, $30,000 to get your picture taken with President Obama?

Even parents of tweens cringe at the thought of spending $60 to send their offspring to a Justin Bieber concert. Isn’t he from Canada?

The reason this occurs is simple and completely legal, yet their really is something here to discuss. When you spend that kind of money at a political fundraiser you expect future access. You expect to be heard. You expect to be able to remind the Democrat party – or yes the Republican Party – that you contributed $30,000 (or whatever). You expect members of congress to accept appointments you make so you can discuss issues.

With that said, would I suggest eliminating the ability for people or groups of people to contribute to a party? Maybe limit contributions to $100 per person? Hell no, that is not the solution and quite honestly it destroys free speech.

The answer is in the United States Constitution folks. By beginning to remove all powers the federal government has usurped from the states since the 1930s, you’ll immediately solve a significant part of the problem.

Certainly, lobbyists and corporate leaders will continue to hold fundraisers at their homes with the expressed goal of access to state political leaders, and you know what? I’m perfectly fine with that. I’d much rather fight corruption, statists, progressives, liberals and socialists at the local level where I can better keep an eye on them.

We are the United States of America after all are we not?

Symptom of the Disease: Congress-critter hands out scholarship dollars to relatives