Nice gig if you can get it. David Axelrod, adviser to President Obama and White House spam director, sold his Chicago-based Democrat-exclusive consulting and marketing firm in December. The sale included a deal where he would still get paid $2 million the firm owes him – or he owes himself – while serving as senior adviser to the president at the White House.

From Bloomberg.com, with a hat tip to Pam Geller at Atlas Shrugs. [Update, Michelle Malkin is on this story too, as is Ed at Hot Air.]

Two firms that received $343.3 million to handle advertising for Barack Obama’s White House run last year have profited from his top priority as president by taking on his push for health-care overhaul.

One is AKPD Message and Media, the Chicago-based firm headed by David Axelrod until he left last Dec. 31 to serve as a senior adviser to the president. Axelrod was Obama’s top campaign strategist and is now helping sell the health-care plan. …

Axelrod was president and sole shareholder of AKPD from 1985 until he sold his interest after Obama’s victory, government records show. The firm owes Axelrod $2 million, which it’s due to pay in installments beginning Dec. 31. Axelrod’s son, Michael, still works there. He didn’t return a phone call. The firm’s Web site continues to feature David Axelrod’s work on the Obama campaign.

Not only does AKPD’s Web site feature Axelrod’s work and a quote from the “founder”, the site is practically a shrine to the success of the Obama campaign. On top of that, the sole shareholder of AKPD Message and Media prior to the sale in December was David Axelrod himself, so he cut a deal with himself and the new partners to ensure he got $2 million after he left.

That’s what you call Beltway insurance… if all hell breaks loose and the boss throws you under the bus, you need a plan B.

“Campaign manager of the year” and AKPD senior adviser David Plouffe’s name and resume is now the main focus on the AKPD Web site. He’s the guy who sends out e-mails for the Organizing for America (OFA) political wing of the Obama White House. Quite honestly, many people probably don’t know the difference between the OFA e-mails and the official White House e-mails; like the one David Axelrod (cough, cough) sent out concerning the health care fight last week. 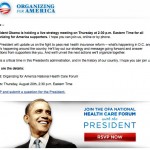 Here’s the e-mail from Plouffe sent about two hours ago. (Click the image to enlarge.) You tell me – from OFA or the White House? Is there a difference? Sure, right at the top is the Organizing for America Obama logo, but this is just another symptom of the disease. (I don’t have a copy of the Axelrod e-mail anymore.)

I don’t mean to bury a second lede, but this symptom of the disease story does not end there. The special interest group Healthy Economy Now hired AKPD Message and Media to help them sell the health-care overhaul.

This year, AKPD and GMMB [a second firm with Obama ties] received $12 million in advertising business from Healthy Economy Now, a coalition that includes the Washington-based Pharmaceutical Research & Manufacturers of America, known as PhRMA, that is seeking to build support for a health-care overhaul, said the coalition’s spokesman, Jeremy Van Ess.

Of course, Axelrod does is not involved with AKPD’s work with Healthy Economy Now, that would be perceived as a conflict… cough, cough, cough. …

Supporters of Healthy Economy Now include the purple-shirted thugs of the Service Employees International Union (SEIU) – ugh. Geller sums up…

It’s hard to imagine a situation in which, say, Karl Rove was still getting checks from a firm that was, in turn, employed by the drug lobby not drawing fire from the left, and Axelrod’s arrangement is, a bit belatedly, getting that attention.

The “Birthers” get a big push from … Chris Matthews? UPDATE: More Matthews UPDATE 2: I believe

The going price of betrayal…