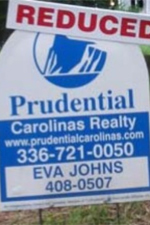 Ouch. Although some analysts suggested July home sales would drop around 12 percent, the figures just in from the National Association of Realtors indicate July existing home sales numbers dropped more than 27 percent.

Existing home sales dropped a record 27.2 percent from June to an annual rate of 3.83 million units, the lowest since May 1995. June’s sales pace was revised down to a 5.26 million-unit pace from a previously reported 5.37 million.

Analysts polled by Reuters had expected sales to fall 12 percent to a 4.70 million-unit rate last month.

“This is a worrisome report and while it reflects the volatility caused by the end of the (government home-buyer) tax credits, it also indicates a deterioration in the underlying trend for housing demand,” said Michelle Meyer, senior U.S. economist at Bank of America Merrill Lynch in New York.

Are buyers – if there are any – waiting for another federal government program to buy a house? Maybe yes, maybe no, but the home buyer credit program seems to have simply moved some home purchases up a quarter or two with buyers jumping in before the credit expired back in April. Just like cash-for-clunkers, the program has not kick-started anything.

I’ll be the one of the first people to say that government probably should not be involved with “kick starting” the housing market as it would make sense the economy could do that on its own. Are we able to figure out the return on investment here? How many would have purchased anyway? How many moved their purchase decision forward? How many were renters who purchased because of the deal?

Renting is not a bad thing, and we should not be providing home loans to those who can not afford a home. In a certain context, I understand Congress’ – and yes, the Bush Administration’s – drive to encourage home ownership simply because of the perception of value (if you own something and have an investment in it, you’ll treat it better). But it was flat out wrong to push that with the availability of easy credit.

More on the home sales drop over at Hot Air.

Nancy Pelosi: Hey, what say we spread the wealth around a bit – Video

Democrats Blame Bush for Everything – PROVE IT

George Will to Obama: Next time use a spoon

Rahm Emanuel tied to Freddie Mac – nothing to see here

Governor Malloy are you sure Connecticut is open for business?
7 replies

Obama one term President? Hillary in the on-deck circle?