The Bristol, Conn. Public School system has been called out for what can only be called gun-control indoctrination using old information pushing a specific political agenda. Luckily, parents took notice of the lies and propaganda, and Bristol’s superintendent of schools had the assignment withdrawn from the classroom. 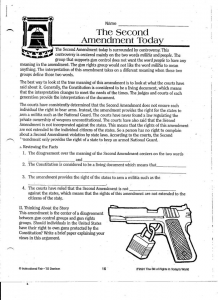 Of course, we should ask how long this has been going on for and what it will be replaced with, but I don’t think we should expect a response. This document claims the Second Amendment only provides the right of a state to keep an armed National Guard. Are you outraged yet?

The classroom curriculum included the worksheet shown to the right. Click on the image to view full size. The worksheet page is from The Bill of Rights in Today’s World, written for Grades 5 – 8 and published between 2000 and 2003 by Instructional Fair. The ISBN number is 1568229194. It was handed out to 8th graders at Northeast Middle School on April 8.

I want to point out some of the factual errors in the document may be excused since it was written 10 years ago. That said, a complete bias against the true meaning of the Second Amendment flows through the entire page. The administration and teachers can not be excused for using this worksheet. They have not meet the expectations of the public. Along with the priceless illustration of a “trigger lock”, the worksheet’s text reads as follows…

The Second Amendment today is surrounded by controversy. This controversy is centered mainly on the two words militia and people. The group that supports gun control does not want the word people to have any meaning in the amendment. The gun rights group would not like the word militia to mean anything. The interpretation of this amendment takes on different meaning when these tow groups define those two words.

Oh really? Gun control advocates don’t even bother with the Constitution any more. Not one references the Second Amendment to prove their point, they avoid it in every way imaginable. All they can to is mention muskets and tell me I don’t need an AR to shoot deer. I’ve got no problem with the Second Amendment as written, because I know what the at-the-time definition of a militia was, and it was not the National Guard.

The best way to look at the true meaning of this amendment is to look at what the courts have said about it. Generally, the Constitution is considered to be a living document, which means that the interpretation changes to meet the needs of the times. The judges and courts of each generation provide the interpretation of the document.

Did anyone else just throw-up a little bit? God forbid we look to the Founding Fathers – who wrote the document pledging their lives, fortunes and sacred honor to the cause – to see how they interpreted the Second Amendment. Their interpretation was clear. It is not a “living document.”

Yup, that’s what your kids are being taught to this day. Certainly Heller and McDonald were not case-law when this was written, but even though, every bit of it is complete hogwash. This worksheet used the word “facts” … who approved this crap? This was pure indoctrination when it was written 12 years ago and should never have been used. As far as we can tell, teachers have been using this worksheet for 12 years.

Dr. Ellen Solek, the superintendent of schools in Bristol, issued the following statement earlier this afternoon. It was sent via email and not published on the school system’s website. (At least I don’t see it.)

The assignment given to students at Northeast Middle School has been withdrawn in the best interest of the district. Parents with concerns or questions regarding any assignment are encouraged to contact the school directly.

Steven Boibeau from Bristol contacted us before noon this morning looking to send us the document, but I did not get back to him until just before 7 p.m. ET. He shared his story with Todd Starnes at Fox News Radio earlier in the morning. I found reference to the document on another forum and a member forwarded me the information. Thanks to Bill J. for sending me details with the text of the email from Solek.

UCONN Hartford Courant poll has Obama up by 21% in Connecticut