As a follow up to one of Jim’s topics on Thursday’s show, what follows are the grim details.  State governments are looking at a $1 trillion shortfall between what they have promised state employees in retirement benefits, and, what the states have set aside to pay for those  promised benefits.  But, should any more bad news be needed, this figure, from the Pew Center, is based on data as of June 30, 2008.

Since that time, state pension funds have had substantial investment losses, making the Pew figures quite conservative by today’s standards.

The pension problems started well before the recession. Even in good times, states were skipping pension payments, leaving larger holes to fill in future years. State legislatures also increased benefit levels without setting aside extra money to pay for them.

Raising taxes to fill pension coffers would be a difficult sell to taxpayers…Public-sector employees in California and other states are facing a growing backlash from residents who are having their own benefits stripped by employers.

Now what?  We all know that policemen and firemen perform thankless jobs that most of the rest of us wouldn’t, or couldn’t do.  And, that they have been promised benefits by the government, promises that the government should try to keep.  But, the private sector has lost millions of jobs in the past 2 years, further eroding the tax base, and taxes collected.  So where will this $1 trillion shortfall come from?

UPDATE (Jim): Here are the numbers from Connecticut, per Chris Keating’s article:

Since the state legislature and governors have not set aside enough money through the annual budgeting process, the state’s unfunded pension liability has increased by more than $9 billion since 2000. Connecticut’s pension fund grew by 89 percent between 1999 and 2008, the report says, but the liabilities — the amount the state owes to the pensioners over the long term — grew even faster, essentially doubling.

The nonprofit Pew Center on the States said, “Connecticut’s management of its long-term pension liability is cause for serious concern, and the state needs to improve how it handles the bill coming due for retiree health care and other benefits.”

This, my friends is serious. I can only hope the unions understand just how serious this is.

Update 2 (Steve): Here is the graph from the Associated Press story this morning, pulled from the Pew Center report. 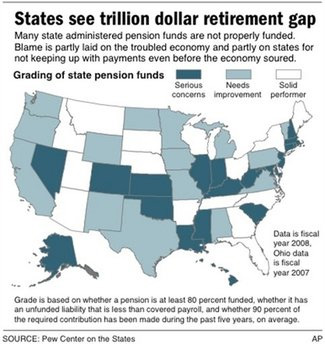 CNN poll: Obama down … it must be racism. Guantanamo Part II…Yucca Mountain (Update)
Scroll to top