Starbucks is a business that wants to sell coffee. They never wanted to be involved with the gun control debate, but when asked about their policy on customers carrying guns, they simply stated they support the federal, state and local laws of the communities they do business in.

Starbucks does not have a corporate policy regarding customers and weapons; we defer to federal, state and local laws and regulations regarding this issue.

That was the correct and right answer. I want to point out this is the policy for most fast food joints and coffee houses in America. There are exceptions, but the most prevalent policy is “we defer to federal, state and local laws.”

When gun control activists heard Starbucks’ policy, they freaked out and labeled Starbucks as a “NRA-loving” company and began to target the chain. Activists from Moms Demand Action got into action sending emails and organizing a “Skip Starbucks Saturday” event for Aug. 24. There were competing events around the country during July and August. As far as I can tell, the Aug. 24 plan backfired since the 2nd Amendment crowd turned it into a “thank you” day. This has been going on for years, and started with California open carry activists pushing the issue by open carrying handguns with no magazine loaded and holding unofficial “meetings” with friends at the chain.

I wrote the following on Aug. 22 – updated on Aug. 24 with my emphasis in bold, and the reference to the $2 bills is a connection to the 2nd Amendment.

Instead of dragging the company into all of this, just quietly thank them on a regular basis by being a good patron and paying with $2 bills. No $2 bills? Leave them a business card with a note of thanks.

No need to organize “public meetings of support” at the establishments since they just draw unwanted attention and can be a negative. The Starbucks in Newtown, Conn. just closed for the day when everyone announced they were going to meet there armed openly or concealed to “support” the store. The media and social media attention was not what they wanted.

Reminds me of the California open carry movement that seems to have backfired.

I had a crystal ball with me that day. There are some in the open carry movement who feel the need to make a point. I’ve heard the “if we don’t use it we lose it” argument. I’ve posted an article from an author who explained why open carry was right for him. There are plenty of open carry activists – yes they are activists, not ambassadors or advocates – who walk around with video and audio recorders trying to get a reaction from law enforcement and the public. The videos are all over YouTube. These people look like fools. 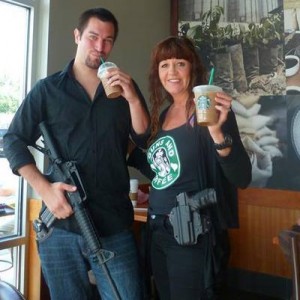 In certain areas of California, it has been very difficult for law-abiding residents to receive a firearms carry permit. Up until January 2012, it was not illegal for people to open carry their pistol as long as it was unloaded, so those who could not get carry permits – but could still purchase and own firearms – started to open carry. Activists started to hold meetings in places like Starbucks because of their “we follow the law” policy. They also brought video and audio recorders with them. Their stated intention was to just go about their day, but they really were trying to “inform” people about the law and have them get used to open carry. They frequently carried brochures they would hand out. These were organized events trying to get a reaction.

Congratulations to the open carry activists! You lost. 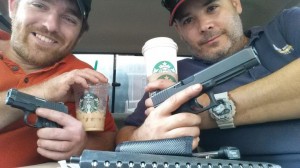 Starbucks continued to get pushed into the debate this summer. Gun-control activists are calling the Starbucks CEO announcement a clear win thanking them with a graphic on their home page stating “No More Guns in Stores!” Of course, that’s not at all what Starbucks said. Starbucks did not ban guns at all, they simply asked patrons not to bring them in. They will not be calling the police, asking people to leave or confronting customers.

They want to sell coffee.

During the last day or so, I’ve seen the open carry activists all of a sudden freak out themselves, claiming they are never giving another dime to a place that serves over-priced burned coffee and does not support their 2nd Amendment rights. I say to them … what the hell did you expect? You got all full of stupid when you dragged the company into the issue and planned open carry events at stores across the country. The Newtown, Connecticut store preferred closing their doors instead of accepting your thanks. You could have made quiet gestures that day, but you had to make it a big huge deal. You had to call the media. You had to take selfies not only of open carry holstered handguns, but you had to pull them out, show them off and bring rifles with you too.

Will the 2nd Amendment activists learn from the lessons handed to them in California and by the Starbucks policy change? I’m not so sure, but I’m hoping that when they hear other 2nd Amendment advocates and ambassadors explain how they are hurting the effort, maybe they will change their tune. My guess is some activists – from either side – are going to reach out to McDonald’s, Dunkin Donuts, Burger King or Chick-fil-a and find out their corporate policy on customers carrying firearms would be to have the franchise owners abide by all local, state and federal laws. (The same as Starbucks’ before yesterday.) The gun-control crowd will immediately point out the policy and demand a boycott of the “NRA-loving” corporation. The open carry crowd will immediately start holding meetings at the joints in states that permit open carry and video record the reactions in their effort to “support” and “thank” the franchise. Heck, a lot of those places have free WiFi so don’t be surprised if you start seeing live broadcasts soon.

Connecticut state senator submits legislation to limit firearms to one round

30 shot in Chicago over the weekend (so far)